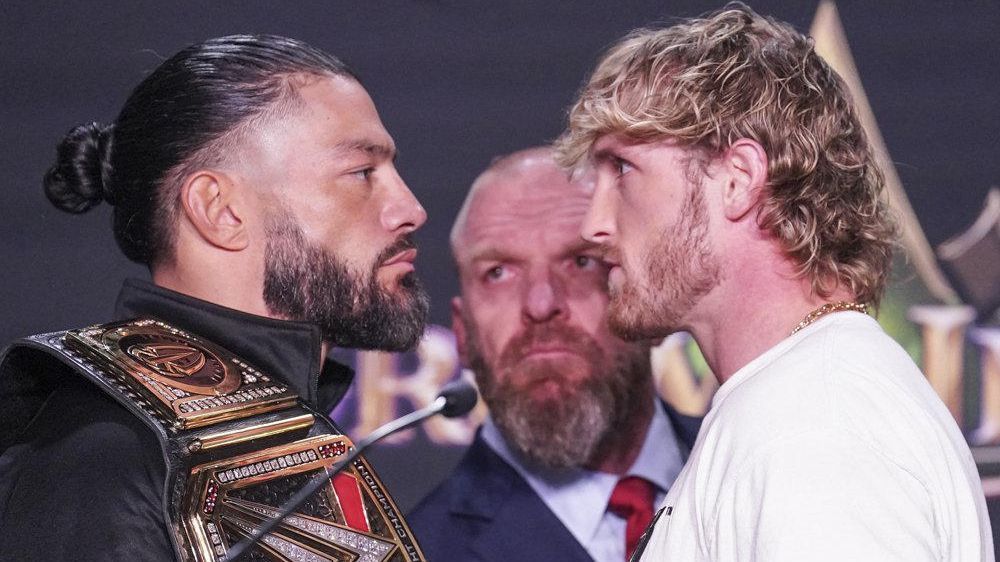 Logan Paul’s first match came on wrestling’s biggest stage, WrestleMania. Paired up with The Miz, Paul showcased some tremendous skill and demonstrated his passion for the industry. In July, at SummerSlam, he found his way back to the ring, this time against The Miz. After a memorable leap onto the announce table and a skull-crushing finale, Paul emerged with not only the victory, but the respect of those around him for what he was able to bring to the squared circle after such a short period of time.

But Saturday will be different. At at Msool Park in Riyadh, Saudi Arabia, Paul will face the man nobody has been able to dethrone for years — Roman Reigns. Can the third match of his career prove to be one that changes his life forever?

Follow along as Mike Coppinger recaps all the action and offers a look at what may be next for each superstar.

Bray Wyatt is in Riyadh, and someone has a message for him!

What could be behind this message for Bray Wyatt?#WWECrownJewel pic.twitter.com/t48RxsU5DN

The match started hot after Bayley sat Belair in a folding chair and delivered a flying clothesline off the barricade. Bianca responded with a suplex on the ramp, but Bayley gained the upper hand when she feigned an ankle injury and suckered Bianca in with an attack.

Back inside the ring, she used a chair shot to Bianca’s back, and once perched on the turnbuckle, Bianca threw a chair to knock her off. Bayley was able to trap Bianca against the apron with the stairs and went to work with the kendo stick before Bianca responded with a spinebuster on the steps.

The match picked up with a Bayley to Belly on the ramp before she tossed Bianca into an equipment case. Bianca eventually broke out before the referee reached a ten count but was swiftly thrown into a crossface. Bayley then emerged behind the wheel of a golf cart and the fight continued on the roof. With Bayley incapacitated on top, Belair drove to the ring and tossed her off onto a table that didn’t break. A subsequent power bomb planted Bayley through the table, but she was up at 9.

Belair powerslammed Bayley onto a stack of chairs and then flew off the top rope with a 450 splash, but Bayley evaded. Bianca landed on the pile of chairs but was up at the count of 9.

Finally, Belair delivered a KOD onto a chair before she trapped Bayley in a ladder under the ring post for the ten count.

What’s next: With two successful title defenses against Bayley, it’s likely time for a new program for each, but Belair and Bayley always make for outstanding matches.

The Usos — Jimmy and Jey — retained the undisputed tag-team championship with a victory over Butch and Ridge Holland of the Brawling Brutes.

The match ended when Jimmy and Jey connected on a 1-D from the top rope on Butch for the 1-2-3.

Jey Uso entered the match with his right hand wrapped; Michael Cole claimed he was dealing with a potentially broken wrist and would have an MRI on Monday.

Immediately, the Usos attempted to walk out and take a count-out loss to retain the titles, but Butch stopped them with a flying knee to outside. Butch later connected on a tornado DDT on Jimmy before he laid out Jey with a moonsault. Later on Ridge, picked up and slammed The Usos simultaneously.

The Usos delivered a series of super kicks followed by a double Uso Splash from the top rope, but Holland was there to break the count. Holland spiked Jey with White Noise before Butch applied joint manipulation on Jey’s injured right hand.

That led to Holland scooping up Jey before Butch super-kicked him, followed by a body slam. This time, Jimmy was there to break the pin, leading to the 1-D for the finish.

What’s next: The Usos will defend the titles against Kofi Kingston and Xavier Woods of The New Day on SmackDown next Friday. The New Day holds the WWE record for the longest tag-team title reign at 483 days. They’ll attempt to stop The Usos, currently at 475 days and counting, from breaking their mark.

Omos dominated the early going with a series of attacks punctuated by a running boot. He scooped Strowman up for the body slam with ease and then pinned him with one foot. Then he did the same a second time, both the slam and the arrogant pin.

Strowman finally countered with a series of right hands and then clotheslined him out of the ring after a second attempt. Once outside the ring, Omos flattened Strowman. Back inside the ropes, Omos attempted a two-handed choke slam, but Strowman countered with the running powerslam for the win.

What’s next: Strowman and Omos could head in different directions. After all, there’s only so much WWE can do with two men of that size in a match.

In their first six-man tag against each other, The Judgment Day — Finn Balor, Damian Priest and Dominik Mysterio — defeated The OC (AJ Styles, Karl Anderson and Luke Gallows).

The finish came after Styles set up Mysterio for the Phenomenal Forearm, only for Rhea Ripley to peel him from the apron and onto her shoulders before she planted him. Once back in the ring, Balor capitalized with a shotgun dropkick followed by his finisher, the Coup De Grace from the top rope, for the pinfall victory.

Balor attempted the Coup De Grace moments earlier, but Styles recovered and superplexed the leader of Judgment Day while Gallows and Anderson connected on electric chairs on Mysterio and Priest, respectively.

What’s next: This program is just starting with the addition of Gallows and Anderson and should continue to play out over the coming weeks.

Drew McIntyre evened the score with Karrion Kross in a steel cage match when his feet hit the ground just as Scarlett was ushering Kross toward the door.

McIntyre was on the verge of escaping earlier, but Scarlett sprayed McIntyre and the ref with mace as he pushed through the door. That allowed Kross to crawl toward the door before McIntyre recovered and tossed his rival in the ankle lock, incapacitating him long enough to climb the cage wall and win the match.

The match kicked into another gear earlier when McIntyre delivered the Michinoku Driver followed a spinebuster. Kross responded with the Doomsday Saito before McIntyre connected with the Future Shock DDT.

Scarlett was able to distract McIntyre, allowing Kross to apply the Krossjacket, followed by the Krosshammer. Kross made it to the top of the cage, with his second foot over, when McIntyre caught him and superplexed him for the high spot of the match.

That’s when Drew made his first attempt to escape the cage door, leading to Scarlett’s interference.

What’s next: With the score tied at 1-1, Kross and McIntyre expect to end their feud in a rubber match at Survivor Series.

Alexa Bliss was on the top turnbuckle preparing for Twisted Bliss when Cross intervened and connected with a draped DDT, which allowed Kai to secure the pinfall while Sky and Asuka occupied the referee’s attention.

Earlier in the fast-paced match, Asuka was being worked for an extended period before she finally found Bliss for the hot tag. She delivered a series of strikes and then a double dropkick to bring them back into the match.

Bliss delivered the double knees, followed by a senton on Kai before she connected with a tornado DDT. Alexa continued to pull out the stops, this time with a Canadian Destroyer she calls Code Red.

Damage CTRL set up Bliss for a double suplex off the top rope before Asuka joined the action for a combination suplex-power bomb. Asuka connected on a missile dropkick on Kai and then a codebreaker. She also hit a German Suplex for the pin before Kai delivered a Helluva Kick.

Alexa attempted Twisted Bliss, but Kai was able to get her knees up. Then, Sky attempted a springboard moonsault, but Asuka was able to evade. This allowed Bliss to drop Kai with a Twisted DDT to set her up for Twisted Bliss before Cross intervened.

What’s Next: After Asuka and Alexa Bliss were able to wrest the titles away on Raw, a rubber match is undoubtedly in order for the tag team titles.

Brock Lesnar escaped with the pinfall victory in an abbreviated, hard-hitting match between two of the strongest wrestlers on WWE’s roster.

A stunned Lashley completed his heel turn by applying the Hurt Lock a second time after the match while boos rained down with Lesnar incapacitated.

The match started almost out of the gate, with Lashley attacking Lesnar before he could even enter the ring. He rammed Lesnar into the steel stairs and The Beast Incarnate sold a left knee injury for the remainder.

Lashley then hit Lesnar with a spear, and, once inside the ropes, connected on a second spear. Lesnar was able to exit the ring to buy some time to recover, but Lashley followed him and a third spear sent Lesnar crashing through the barricade.

After a fourth spear inside the ring, Lesnar, who sported a braided ponytail, kicked out at 2. Afterward, Lesnar finally began his attack. He took Lashley to Suplex City with three consecutive German Suplexes, followed by the F5.

Lashley was able to clothesline Lesnar over the top rope to the outside and threw him in a fireman carry before ramming him into the ring post. The Almighty attempted another spear, but Lesnar reversed into an F5 attempt. But before he could deliver it, Lashley drilled him with a modified spinebuster before the Hurt Lock was applied.

What’s Next: Following Lashley’s post-match attack and complete heel turn, it appears the feud could continue, especially with one of WWE’s tentpole events, Survivor Series, at the end of the month. Lesnar competes on a part-time schedule but it would be a surprise if he missed Survivor Series.