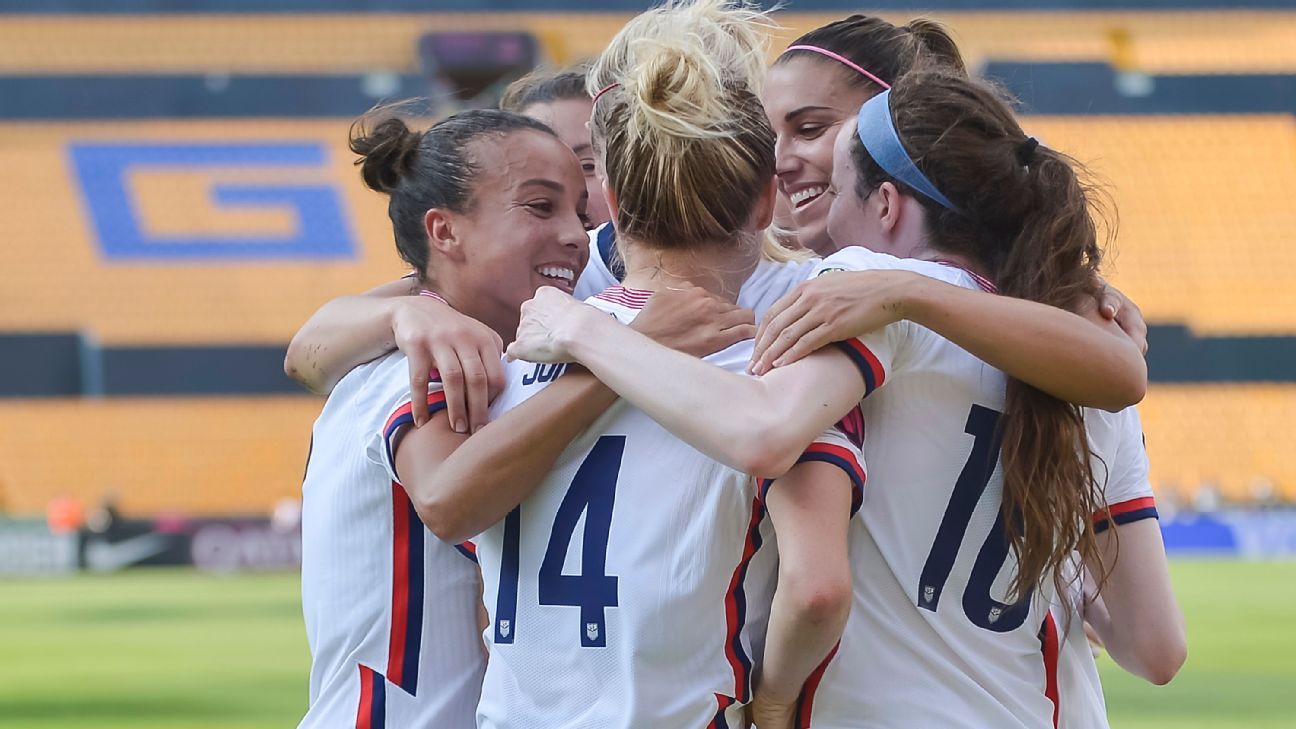 MONTERREY, Mexico — Thursday brought another methodical performance from the United States women’s national team in a 3-0 victory over Costa Rica at Estadio Universitario. The result clinched the Americans a place in Monday’s CONCACAF W Championship final, a match they and nearly everyone assumed they would win from the start.

The path there has been more laborious than dominant for Vlatko Andonovski’s squad, but it was enough to qualify for the 2023 World Cup — where the US will look to win an unprecedented third straight title — and put the US within one victory of clinching a place in the 2024 Olympics.

“I think we need to be overall sharper,” said Emily Sonnett, who scored the USWNT’s initial goal on Thursday. “I don’t think our team is very satisfied with that. There’s a lot that we need to focus on. But overall, I think we’ve competed, and I think we’ve stuck to game plans every single game. How do we put it all together now going forward?”

Two of the goals on Thursday were products of the US implementing pressure high up the field at the right time. Sonnett’s opening goal in the 34th minute — the first of her career in 69 appearances — was, like the Kristie Mewis game-winner in Monday’s 1-0 victory over Mexico, another scrappy effort from a corner kick.

Important to the creation of that opportunity is something which will not show up on the stat sheet: an individual defensive effort from Mallory Pugh high up the field. One minute after Pugh nearly stripped Costa Rica goalkeeper Noelia Bermudez of the ball in her own box, as the lone player pressed, the US winger put Costa Rica’s defense under pressure deep inside their own defensive third, winning the ball and going straight to goal to force the corner kick. Sonnett scored on the ensuing play.

Ten minutes later, it was Pugh on the finishing end. Sophia Smith won the ball just outside of Costa Rica’s penalty area and Rose Lavelle reacted quickly, backheeling it into the path of Pugh, who was running in behind. Lavelle’s technical skill made the play, but Smith’s pressure to win the ball back in a high area was the catalyst.

“I think pressing is a great opportunity to transition and attack,” Pugh said after the match. “So, I think if you look at it that way, like defense is offense, I think that’s just part of our identity. We want to create these attacking transition moments to be able to create ad just keep going. We want teams just to feel that pressure, so I think it’s just part of our identity.”

Since Andonovski’s first game in charge in November 2019, the US’s press has been more varied than the previous iteration under Jill Ellis. The 2019 World Cup-winning team played with a relentless, high-energy press which demanded significant defensive efforts from its forward line as well as a midfield which was asked to cover large swaths of ground in wide areas. The ongoing absences of Julie Ertz (pregnant) and Sam Mewis (recovering from injury), two of the three starting midfielders at the 2019 World Cup, are part of the reason that area of ​​the team is in transition.

Andonovski took over the job with a determination to add nuance to the team’s defensive pressure. His objective, he said at the time, was not to completely recalibrate a system which had brought the team great success, but rather to add sophistication to the process. At times, that means the Americans will drop their line of confrontation slightly to challenge their opponent to play through them. Many opponents — especially in CONCACAF — cannot do it.

On Thursday, the circumstances dictated that the US be selective about when to press, anyway. The game kicked off at 6 pm local time under the relentless sun as Monterrey’s ongoing drought drags on. The temperature at kickoff was 96 degrees Fahrenheit, with a feels-like temperature of over 100. Thursday was also the fourth game in 11 days for each team (10 for their opponents), and with the final looming against Canada on Monday, the US staff had to allow themselves to look ahead.

The upcoming US-Canada clash is a rematch of last year’s Olympic semifinal, which the Canadians won on its run to a gold medal, forcing the US to settle for the bronze medal. Canada will be the toughest and deepest opponent the US has faced all tournament. It is also a team which likes to find transitional moments and strike on the counterattack, much as it did in that semifinal in Tokyo. The US dominated most of that match but conceded a fluky penalty on a Canada counterattack and lost 1-0.

Much of those same dynamics will be at play again on Monday, although the US’ roster has undergone a significant overhaul in the 11 months since that game. Canada, who defeated Jamaica 3-0 in Thursday’s late match, will be defensively sound and look to exploit the US in wide areas as the Americans’ fullbacks push forward. That likely means the US will pick their moments to press their rivals, to limit their exposure on the counterattack.

“I feel like the way that Vlatko wants us to play, it’s different every game, right?” Alex Morgan said. “It depends on if it’s a four-back or a five-back [for the opposition], the way that they pressure — whether inside or outside, the spaces that they give, or the high line or a low line. I think we’ve faced different challenges every game.”

Morgan followed up by noting that the US could have led 3-0 by halftime but missed chances, including by her. She hit the post moments into the match and the US missed several opportunities from close range, which has been a theme of this tournament. The sharpness still isn’t there for this version of the US, but it will need to be on Monday. The loser of the final will have to wait a year to confirm its place at the 2024 Olympics via a playoff.

“I thought that we made too many technical errors, too many for the players that were on the field,” Andonovski said “Because we know that they are technical. We know they can settle the ball and pass and that they can execute different technical demands.”