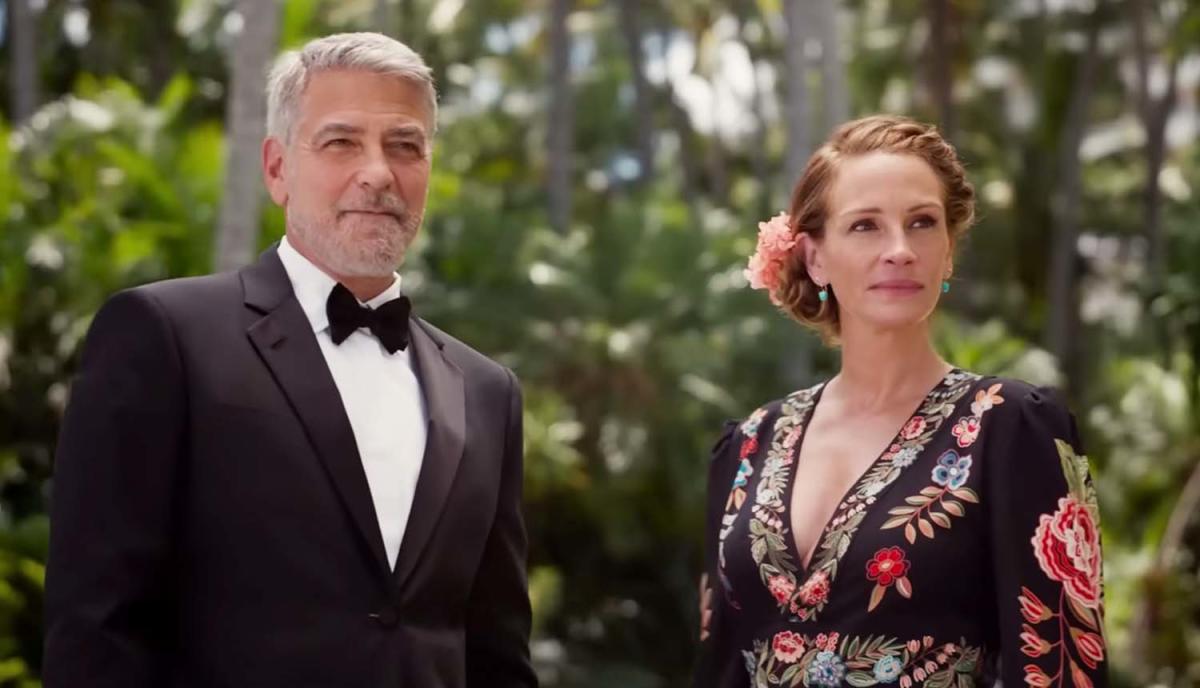 Could George Clooney and Julia Robert’s “Ticket to Paradise” bring back the box office rom-com?

“If ‘Ticket to Paradise’ proves as successful as it looks like it could be, that would give this year alone — in a very challenging year to do it — two successful rom-coms,” Box Office Pro Chief Analyst Shawn Robbins told Yahoo Finance, referencing the surprise success of Sandra Bullock and Channing Tatum’s “The Lost City,” which secured $190 million globally with more than $105 million stemming from the domestic box office.

“That may signal a little bit of a renaissance for the genre in the coming years,” Robbins surmised.

“Ticket to Paradise” has already secured nearly $75 million across 75 international markets — a successful start for the low-budget Universal film.

“Considering how well it’s already done internationally, that takes some of the pressure off of its domestic debut,” Robbins said, estimating that the film will see opening weekend ticket sales in the low to mid-teens.

The analyst cautioned that the movie could be more of a slow burn as it will directly compete with Dwayne ‘The Rock’ Johnson’s “Black Adam,” which is widely expected to secure a $60 million-plus opener, according to industry estimates. Robbins also emphasized that the film’s key demographic of adults 35 and older typically don’t rush out to the theater on opening weekend.

“There may be some room for surprise, but I’m really looking at that staying power and the potential for word-of-mouth to drive ‘Ticket to Paradise’ into November and potentially even into the holidays,” Robbins said.

The rom-com has taken a backseat over the past decade as other genres from Oscar-contending dramas to franchise superhero films race to the forefront.

Superhero movies, in particular, have encroached on other genres, Robbins previously explained, especially comedies since Marvel films tend to have a significant amount of comedic relief.

Marvel’s “Black Panther: Wakanda Forever,” which opens in domestic markets on November 11, may continue that trend as it’s currently expected to deliver a whopping $175 million debut, according to early data by NRG.

As a result, the rom-com has essentially faded away as audiences expect more at the theater.

According to box office analytics platform EntTelligence, the rom-com never drew the same audience as superhero or action films, even in its heyday.

Rom-com classic “When Harry Met Sally,” which debuted in 1989, only ranked 11th in attendance that year with approximately 19.5 million moviegoers.

Overall, moviegoers for “When Harry Met Sally” represented just 7.6% of the attendance for the top films in 1989.

Robbins explained that there are a few factors that can make rom-coms successful at the box office, including: star power, a likable premise, and originality are the most important elements.

“Sometimes the formula becomes too formulaic,” the analyst explained. “There’s a fine balance to achieve something familiar, but also something a little bit fresh. The rom-com genre has had a particularly challenging time out of any genre to do that.”

Coupled with oversaturation on streaming platforms and an ultra-competitive theatrical landscape, studios today are searching for new ways to make the genre unique, Robbins said.

“That’s what audiences want, but there still has to be that element of a hook — whether it’s a star people like, or just a concept people like,” he continued. “Preferably both.”

To that point, not all is lost for the beloved romantic comedy, which has seen some sporadic wins.

One modern rom-com success story is “Crazy Rich Asians,” which opened in 2018 above box office estimates at $26.5 million before going on to secure nearly $175 million domestically.

Robbins called out the film’s cultural appeal, saying it offered something new and diverse for an underserved audience.

“Examples like that show the desire for a resurgent romantic comedy era,” he said.

Alexandra is a Senior Media and Entertainment Reporter at Yahoo Finance. Follow her on Twitter @alliecanal8193 and email her at [email protected]

Download the Yahoo Finance app for Apple or Android