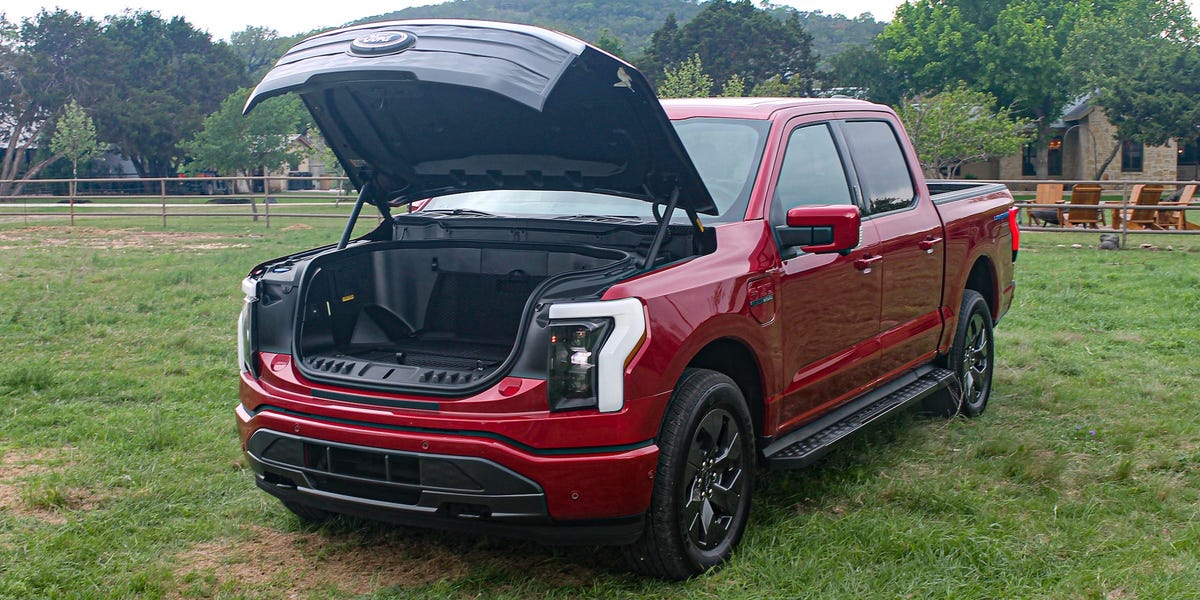 The F-150 Lightning, despite its heft, promises to speed to 60 mph in just over four seconds. It can share electricity from its giant battery pack with appliances, tailgating gear, or, in the event of a blackout, at the owner’s home.

And while automatic backup power could be a lifesaver in an emergency, it isn’t something owners will use on a daily basis. For better or worse, it’s not a capability I got to see in action when I spent a couple of days testing the Lightning earlier in May.

What I did get to use — and what I’m convinced is the Lightning’s greatest feature — is its front trunk. Ford calls it the Mega Power Frunk, which is an extraordinarily silly name for an extremely useful feature.

Like most modern electric vehicles, the F-150 Lightning’s underlying structure looks kind of like a giant electric skateboard. Its motors are mounted down by its axles and its battery sits in its belly. This means Ford can do fun things with all the space that isn’t occupied by a conventional engine.

Pop the Lightning’s “hood,” and you’ll find a generous cargo area that’s larger than the trunk of a Toyota Corolla. Of course, trucks offer plenty of storage space as it is. That’s kind of the whole point. But pickups have generally lacked substantial weather-proof, lockable storage, and the frunk adds just that.

It’s not only spacious — capable of hauling around a few carry-ons and a maximum of 400 pounds — but easy to access.

The whole grille area lifts up, revealing a loading floor that’s low enough for almost anyone to use. By way of comparison, the Rivian R1T, another electric pickup, has more of a conventional hood, so you need to lower cargo into it from above. That could be tough for smaller people.

Imagine you’re traveling with four people and a bunch of bikes or camping gear in the bed. An extra trunk for bags and smaller items would be more than welcome. Or, consider that some owners might like to keep things in their truck permanently, but not have them exposed in the bed.

And the frunk offers some other cool extras.

There’s additional under-floor storage with a drain hole, so owners can fill the frunk with ice or hose it down. A removable panel doubles as a divider that can keep groceries from sliding around. There are a handful of hooks and tie-down points for securing cargo.

The aforementioned “Mega Power” comes in the form of a USB ports and power outlets built into the frunk’s wall, opening up possibilities like charging devices or power tools while on the go.

Zero tailpipe emissions and brisk acceleration are cool and all. But I could see the Lightning’s frunk being the factor that pushes some more hesitant buyers over the edge. And although I can immediately see how useful the frunk could be, future Lightning owners will surely come up with loads of innovative uses nobody expected.