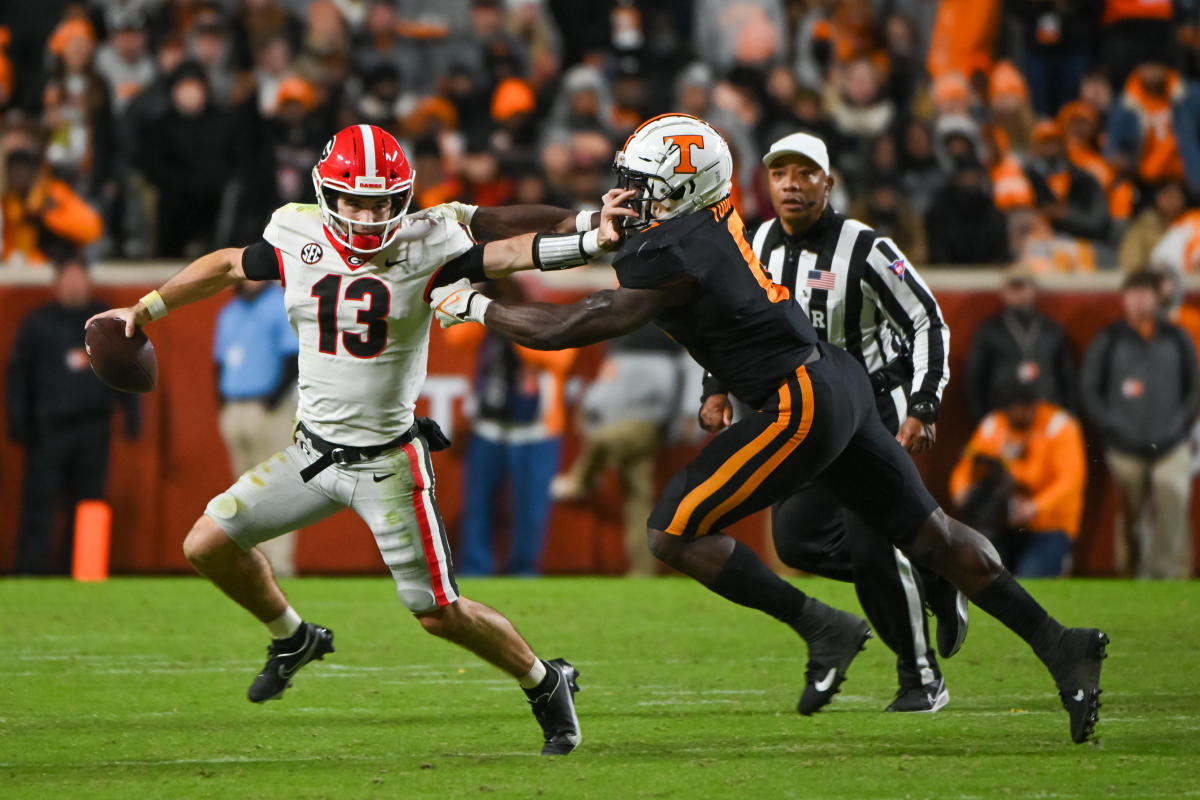 There are two massive matchups on tap for Week 10, both in the SEC. Tennessee, the newly minted no. 1 in the CFP rankings, will head to Athens to face No. 3 Georgia, the defending national champions. Elsewhere, no. 6 Alabama is headed to Baton Rouge to face No. 10LSU.

Another top team, no. 4 Clemson, is on upset alert in South Bend and is one of numerous other ranked teams in a potential flat spot against an unranked opponent.

Let’s see what this weekend has in store.

This feels like it could potentially be a tricky spot for TCU. Somewhat controversially, TCU came in at No. 7 in the CFP rankings despite an 8-0 record. The Horned Frogs just keep winning games, but their last four games have been decided by 10 points or fewer. Meanwhile, Texas Tech has been very competitive for most of Big 12 play. The Red Raiders upset Texas, lost close ones on the road to Kansas State and Oklahoma State and then demolished West Virginia.

Tennessee’s rise to No. 1 in the CFP rankings has been remarkable, and now the Vols have the chance to put themselves in the driver’s seat in the SEC East and take another step closer to a playoff berth. Can Heisman hopeful QB Hendon Hooker knock off the defending national champions? While Tennessee has beaten five ranked opponents, Georgia hasn’t faced a ranked team since its Week 1 demolition of Oregon. There have been a few underwhelming efforts along the way, but the Bulldogs seem to have kicked things back into high gear in recent weeks, with three straight blowout wins. Which team will blink first?

As consequential as the Tennessee-Georgia game is for the SEC East, the Alabama-LSU game is for the SEC West. LSU, Ole Miss and Alabama are all tied for first place in the division with 4-1 SEC records, so whoever wins this one will be in tremendous position to get to the SEC title game. LSU’s offense seems to have taken a big step forward in recent weeks, but it’ll be a tough task to try to keep up with a potent Alabama team coming off a bye week.

Though TCU is sitting alone in first place in the Big 12, Kansas State has a chance to significantly bolster its chance of getting to the Big 12 title game with Texas visiting on Saturday. K-State has played without starting QB Adrian Martinez for the last two weeks and it’s unclear if he’ll be back for this one. His backup, Will Howard, has performed admirably in Martinez’s absence. Texas, meanwhile, still has a shot at the Big 12 title game, but that will have to start with a win this week.

Clemson is 8-0 and in the thick of the playoff race with four games to play. This trip to Notre Dame won’t have any bearing on the ACC race, but Clemson needs this win to get back to the College Football Playoff. In Clemson’s last outing, Dabo Swinney pulled starting QB DJ Uiagalelei after Clemson fell behind Syracuse. Will Uiagalelei have another short leash if he struggles in South Bend? Notre Dame, meanwhile, had an up-and-down year in Marcus Freeman’s first season as head coach. The Irish started 0-2 but have since won five of their last six. Which version of the Irish will show up Saturday?