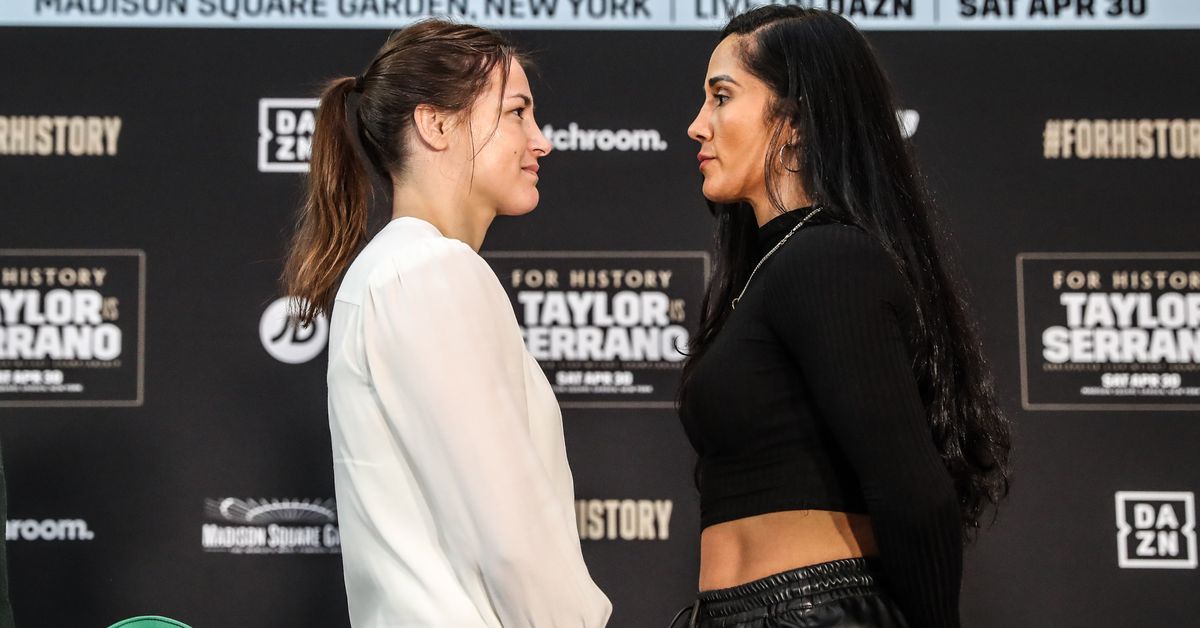 MMAmania.com will deliver LIVE coverage of the Taylor vs. Serrano main event below. The main card broadcast kicks off on DAZN at 7:30 pm ET, while Taylor and Serrano are expected to make their ring walks around 10:15 pm ET (stream it here).

The match up was originally scheduled for 2020, but ultimately fell apart because of the COVID pandemic. Talks reigned last year after Serrano left long-time promoter, Lou DiBella, in favor of signing with Jake Paul, and we now find ourselves just hours away from crowning the best pound-for-pound female boxer on the planet.

Round one: Serrano advancing, eats a combination in the corner. Heavy exchange. Halfway through. They trade lefts. Taylor straight right. Big overhand left by Serrano. Counter combo lands for Taylor, who slips away from the return body shot. Another exchange of lefts. 10-9 Taylor.

Round three: Serrano still trying to bully her way inside. Taylor doing a good job of picking her off. Good exchange in the corner, clinch halfway through. Lead right by Taylor. Another. Solid left from Serrano, flurry from Taylor in return, clinch. Taylor 1-2, low high 2-3. Serrano digs to the body and eats a left hook. Another exchange of lefts. Overhand left by Serrano, then an exchange after the bell as the ref fails to hear it. 10-9, 30-27 Taylor.

Round four: Jab lands for Serrano. Counter two-piece from Taylor, Serrano opens up in the corner until she gets clinched. Heavy exchanges inside. Trading in the clinch. Taylor to the body. Halfway through. Hard rights from Taylor, lead left by Serrano. Big punches by Taylor. She’s still picking Serrano off despite the commentators’ bloviating. 10-9, 40-36 Taylor.

Round five: Good exchanges on the ropes. Serrano rips the body, Taylor comes back with huge combinations to the head. Serrano doing her best work of the fight here. They’re slugging it out. Halfway through the round. Taylor’s definitely hurt and Serrano’s pouring it on. Taylor ties up. Body shot, uppercut, right hook all landing for Serrano. Taylor looking to throw back with her. 10-9 Serrano, 49-46 Taylor.

Round six: Serrano marching in, gets clinched trying to open up in the corner. Trading heat. Taylor’s landing some hard punches but her legs don’t look great. Hard right hands landing for her as I say that. Clinch. Halfway through. Taylor bangs the body, lands a hard right upstairs. Serrano straight left, gets backed off by a bit right. Brutal counters from Taylor. Clinch. Serrano looking towards land inside. Brutal exchanges. 10-9, 59-55 Taylor.

Round seven: Solid right hands landing for Taylor. Halfway through. Serrano goes to the body, eats a two-piece. Taylor 3-2. Serrano straight left. Body shot, 2-1. Taylor pops her with a jab upstairs. Good exchange on the ropes, lead right by Taylor. Serrano to the body. 10-9 Serrano, 68-65 Taylor.

Round eight: Early combination work from Taylor. Serrano still marching in, walks into a right hand. More Taylor counters. They tie up and whack each other with short punches halfway through. Hard 1-2-3 from Taylor. They trade on the ropes. Quick exchange, long right by Taylor. Serrano bangs the body inside. 10-9, 78-74 Taylor.

Round nine: Taylor ramping the output back up, landing combinations. Serrano wades in, gets clinched. Taylor continues to pick her off. Hard counter right from Taylor. Halfway through. 2-1, clinch. Serrano not showing as much volume and is missing big, though she’s still landing some solid shots. There’s some body work in the clinch. Taylor cracks her with right hands in return. Good 3-2 as they exchange. 10-9, 88-83 Taylor.

Round ten: Serrano marching in as they continue to trade. Clinch, exchange on the break. Big left hooks from Taylor as Serrano opens up. Taylor 3-2 halfway through. Taylor tying up when Serrano tries to pressure. Both connect as they separate. Long combos from Taylor, Serrano tries to answer to the body. Brutal shots from Taylor. Serrano trying to answer. Monstrous shots in the center to end the fight. 10-9, 98-92 Taylor.

For more on “Taylor vs. Serrano” and other boxing-related events, click here. Full odds available at Draft Kings Sportsbook.