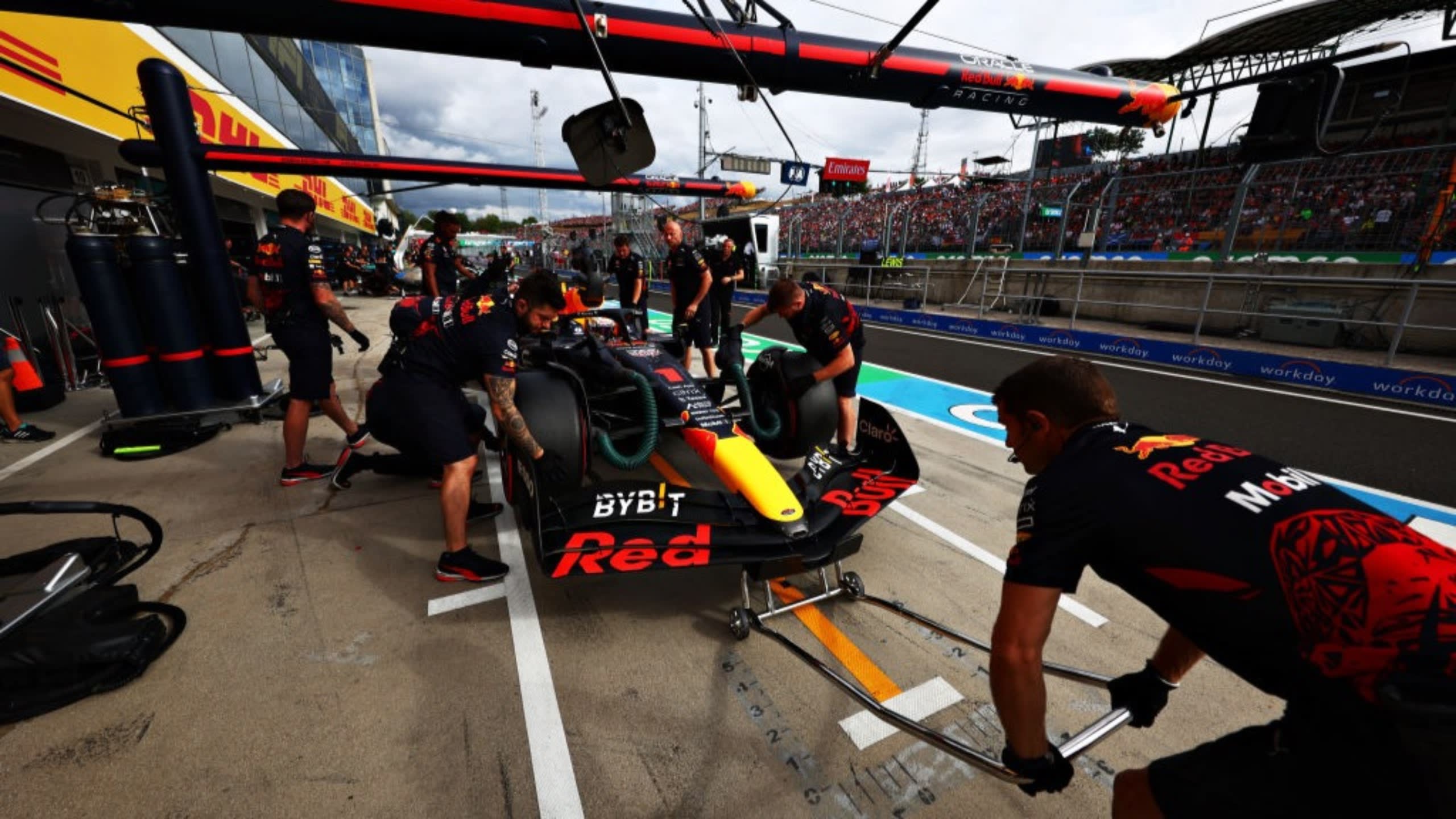 The final race ahead of the mid-season break is upon us and it’s beautifully set up with a new pole-sitter and mixed-up grid, so let’s take a look at the different strategic options available to the teams on race day in Hungary. ..

The teams have been caught out a little bit this weekend after struggling with the hard compound, as it was sliding and wearing in hot conditions on Friday, making it comfortably slower than the medium and soft. The upshot of that is the fact that a one-stop strategy is suddenly much harder to execute without the hard, making the theoretical quickest strategy a two-stop.

But don’t forget that these calculations from Pirelli are done without a number of variables that differ from team to team, as the strategists for each constructor have to factor in things like their specific tire usage, and traffic.

So when it comes to the quickest way to the end of a race, starting on the soft compound is deemed best as it will allow the best launch off the line for one of the longer runs to Turn 1 this season. The opportunity to make up positions would then be followed by a first stint of between 16-21 laps before switching to the medium compound tyre.

The middle stint would be anything up to 32 laps depending on how early the first stop is made, with a second pit window between Lap 42 and 48 for another set of mediums.

Depending on potential Safety Car interruptions and with the fuel load running down, there’s also the potential for a switch to soft tires instead for the final stint, although that is more likely to be reactive to the race situation and come around Lap 50.

How about a different option for the top 10?

The problem with the two-stop strategy above is the fact that it will give up track position on a circuit that is notoriously difficult for overtaking, and there’s a slight unknown about how tough it will be to pass on track this year.

The new regulations have seen much closer racing so far this season, and drivers are able to push behind another car. But that doesn’t mean overtaking is easy, and so it is likely teams are still going to favor making fewer stops so they don’t risk getting stuck behind a slower car and ruining their strategy.

READ MORE: Russell’s big chance, Red Bull’s recovery, and risk of rain – What To Watch For in the Hungarian GP

The quickest one-stop option does use the hard compound, but starts on the medium and runs to a pit window of between Lap 26 and Lap 34, before switching to the hard and running to the end. It’s still a long stint that drivers will have to manage on the hard and tire wear could become a limiting factor if they are sliding around even more than on Friday, but despite the slower pace they are likely to be able to defend their position.

This one-stop is only predicted to be three to four seconds slower than the quickest two-stop strategy, showing how tempting it will be for teams to prioritize the lower number of pit stops. The risk, though, is if it is easier to overtake then drivers might be vulnerable on the hard compound in the second half of the race.

What are the options for the bottom half of the field?

There’s another one-stop option that requires even more tire management, because it uses the soft compound for the first stint of the race.

The attraction here is to start on the quicker compound that will provide the best launch off the line, with a run of nearly half a kilometer from pole position to the first braking zone to make use of that extra grip.

FACTS AND STATS: Hamilton and Verstappen both start outside the top 6 for the first time since 2018 after Hungarian qualifying

The challenge will be extending that first stint long enough on high fuel, with a need to get as close to Lap 25 as possible before switching to the hard compound to go to the end. With a 70-lap race, that would leave a 45-lap final stint.

For a different two-stop option, there is the potential to use all three compounds throughout the race. Starting on the medium tire, a more aggressive first stint would be possible before pitting for hards between Lap 20 and Lap 25.

From there the hard would not need to be managed as much, with drivers able to push harder to try and maintain temperature – which is crucial to making the hard work – before pitting for a set of softs any time after Lap 48.

ONBOARD: Ride with Russell as he claims his maiden pole position in Budapest

Doing a two-stop strategy that utilizes two sets of soft tires – with a middle stint on mediums – is also likely to only be seriously considered by those outside the top ten who have an extra set of softs available for the race that they didn’ t use in qualifying.

Wait, but what’s the weather doing?

The fact that there are so many potential permutations shows that even the teams are unlikely to be clear on their ideal plan, and that’s because the weather has changed significantly since Friday. Temperatures in practice were well into the 30s and track temperatures were up in the 50s, but despite that the hard tire wasn’t performing particularly well.

The race is set to take place in temperatures that are some 10C lower, and on a track that has seen a fair bit of rain over the past 24 hours, so the grip level is not as high as it would normally be either. That all adds up to it being tougher to understand how the tires will react and choose a strategy.

HIGHLIGHTS: Watch the action from a remarkable qualifying session in Budapest, as Russell seals first pole in F1

After some heavy downpours and thunderstorms on Saturday, there is a risk of rain for the race too, although the forecast suggests the highest chance is in a four-hour window prior to lights out.

Even if it doesn’t continue raining right up to the start of the race, if there is enough ahead of the start then there’s a chance there will be a damp track due to the lower ambient temperatures compared to previous days.