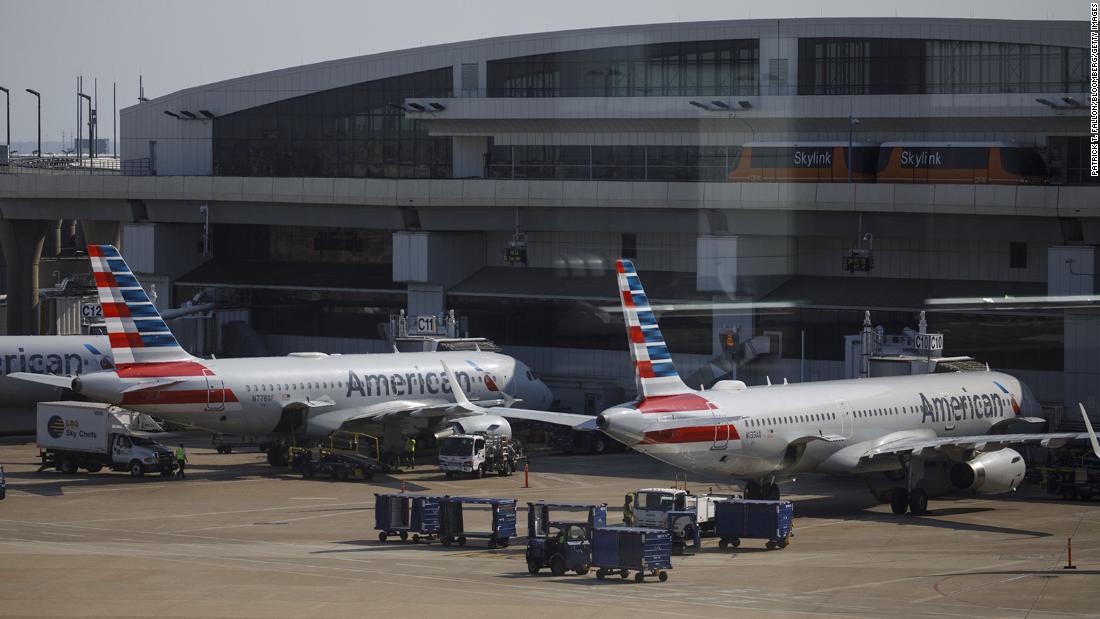 (CNN) — Severe thunderstorms around Dallas-Fort Worth International Airport on Wednesday caused 100 American Airlines flight diversions and led to hundreds of cancellations that extended into Thursday’s schedule.

On Wednesday, American canceled nearly 370 flights. A total of more than 1,200 US flights were canceled on Wednesday, FlightAware data shows.

Southwest Airlines, headquartered in Dallas, logged about 250 cancellations on Wednesday, according to FlightAware. Southwest had canceled about 100 Thursday flights as of noon ET.

Caught off guard by second line of storms

According to American’s Chief Operating Officer David Seymour, the airline prepared for thunderstorms in the forecast south of the airport on Wednesday afternoon. But another wave came by surprise.

“Those storms then regenerated and created an entirely new, and unanticipated, line of storms north of the airport. This unexpected storm activity prevented all arrivals into DFW for a three-hour period,” Seymour said in a memo to staff shared with CNN Travel .

One hundred AA flights were diverted, and the airline proactively canceled all remaining flights into and out of DFW on Wednesday.

“DFW airport had gone 67 days without seeing measurable rain, the second-longest streak on record — weather like this can wreak havoc on our operation. This was the worst storm we’ve seen at DFW this summer, and to make matters worse , there was no indication it was on its way,” Seymour said.

He thanked American Airlines’ staff for their efforts in recovering from the weather disruption and noted that cancellations are “hugely impactful to our customers.”

“Canceling flights is a last resort,” Seymour said in the memo to staff. “But doing so in advance — even with a small window — gives customers the best chance to adjust their plans and avoid last-minute issues at the airport.”

DFW Airport said Thursday that it has resumed normal operations.

A summer of flight headaches

Summer’s severe weather has been compounding other operational challenges, including staffing at airlines and airports.

Transportation Secretary Pete Buttigieg has been working to address air travel disruptions as the demand shattered by the pandemic has come roaring back.

This past weekend was hit with delays and cancellations, with Friday the worst day for cancellations since mid-June.

The Department of Transportation last week proposed a rule that would expand protections for travelers seeking refunds, and the secretary invited the public to weigh in on the rule and to file complaints when airlines aren’t responsive.

The proposed rule would more clearly define cases where flights are significantly changed or canceled to provide a clearer path to refunds in addition to creating more pandemic-related consumer protection.