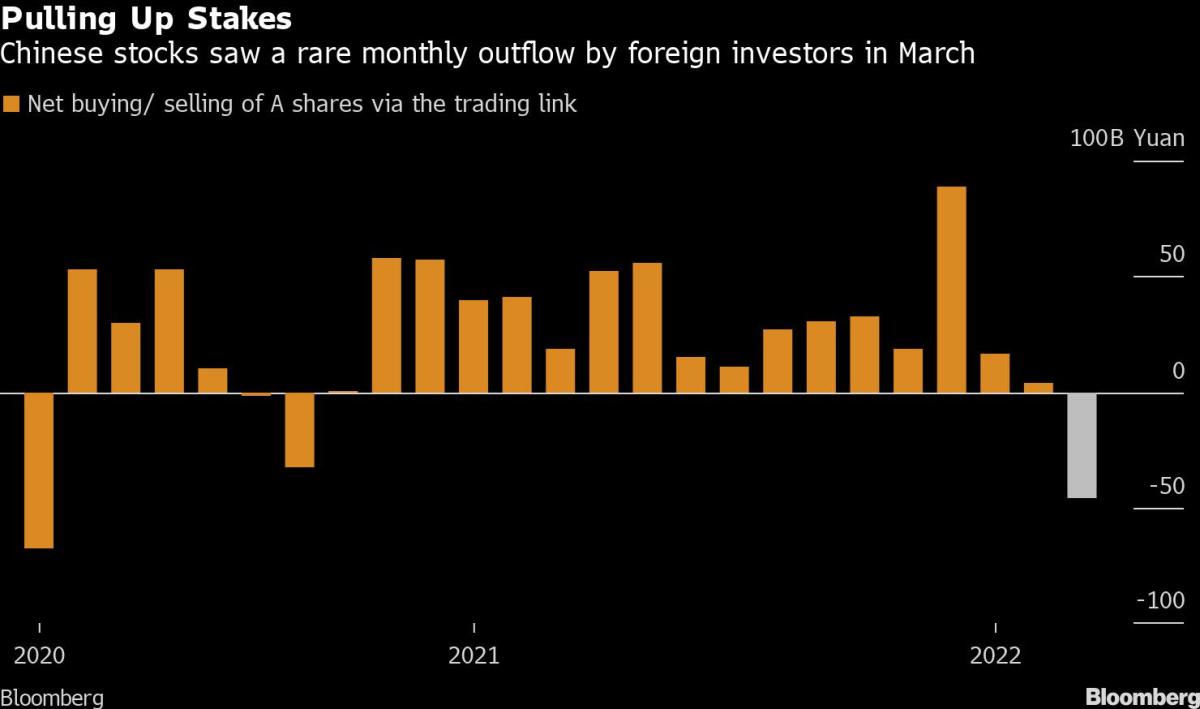 (Bloomberg) — It’s been a painful week for traders of China’s stocks, bonds and currency as growing fears about the fallout from the nation’s Covid Zero strategy send markets tumbling.

Most Read from Bloomberg

The Hang Seng China Enterprises Index of big mainland companies listed in Hong Kong is among the worst-performing stock benchmarks globally this week. The offshore yuan extended declines, hitting the weakest level in a year. High-yield dollar bonds are headed for the longest stretch of weekly losses since March.

Sentiment toward Chinese assets has soured as Covid lockdowns slow economic growth and policy stimulus falls short of investors’ expectations. Domestic equities have lost about $2.7 trillion of market value this year, prompting the authorities to step up efforts to halt the decline.

“For a turnaround in sentiment, we need to see something sincere from policy makers, either a lot of extra liquidity, a major shift in the Shanghai situation, or a massive surprise that will breathe some new hope into the market,” said Wang Yugang , a fund manager at Beijing Ax Asset Management Co.

The Hang Seng China Enterprises Index shed 5.6% this week, the biggest drop in more than a month. Other assets are also under pressure, with the onshore yuan on track for its biggest weekly loss since August 2019. Options traders are pricing in a further weakness for currency after it breached a key technical support level on Wednesday for the first time since September.

Read more: China’s Oil Demand Is Tumbling the Most Since Wuhan Lockdown

“The PBOC is looking to provide further support for the economy, and seems intent on pulling as many levers as possible, perhaps with the exception of lowering interest rates for now,” said Khoon Goh, head of Asia research at Australia & New Zealand Banking Group Ltd. “Allowing the yuan to weaken slightly this week seems to be part of the overall ‘support package.’”

Meanwhile, junk dollar bonds are down for a second straight week in the worst such stretch since mid-March. That pares an initial bounce that the securities got from Beijing’s promises of support, as investor patience for more details wears thin.

In a sign of broader concerns, higher-rated developers such as Country Garden Holdings Co. posted some of this week’s largest declines. Any renewed rally ahead may only be sustained if concrete and significant policy steps were taken rapidly, according to Jean-Louis Nakamura, the chief investment officer for the Asia Pacific region at Lombard Odier.

The authorities are taking action to stem the declines. At a Thursday meeting with investors, the securities regulator called on the country’s giant social security fund, banks and insurers to boost their equity investments.

This was followed by a series of articles in state media projecting confidence in the economy and markets. The concerted efforts underscore growing pressure on authorities to boost confidence before a closely watched leadership confab that’s expected to confirm a precedent-breaking third term for Chinese President Xi Jinping.

This isn’t the first time the government has urged institutional investors to increase positions. A similar call was issued less than two weeks ago following a request made in October 2019.

With no end to tight Covid restrictions in sight, overseas investors offloaded 45 billion yuan ($7 billion) of stocks in March, the largest outflow in nearly two years, while global funds slashed their holdings of Chinese bonds by the most on record that month.

The authorities have shown little alarm about the withdrawals, with Fang Xinghai, the vice chairman of the China Securities Regulatory Commission, saying Thursday that capital outflows will always return.

“Obviously, Beijing wants to stem the bearish sentiment about both the economy and the stock market,” said Castor Pang, head of research at Core Pacific Yamaichi. “But the economy is like a giant ship, and it takes time for it to turn around. Even if Beijing wants to talk up the market, it’s hard to change how investors are thinking.”

Separately, China also published guidelines on the development of individual pensions on Thursday, which CICC analysts estimate to be valued at a total of 1 trillion yuan in the long term. This may help fuel additional inflows into domestic equities.

Meanwhile, the authorities are trying to resolve a dispute involving the audit of Chinese firms listed in the US, an issue which has weighed on sentiment. The securities regulator is holding talks with the US Public Company Accounting Oversight Board every two weeks, and is “confident” about reaching an audit deal, the regulatory commission’s Fang said Thursday.

The Hang Seng Tech Index closed up 0.3% after sliding as much as 3.6% earlier. The mainland benchmark CSI 300 index finished the session up 0.4%, reversing a loss of as much as 1.1%. The gauge slumped 4.2% this week to record its worst five-day performance since mid-March.

Still, the rout may be just what’s needed to draw investors back in. Funds have been on the sidelines as they await the market to form a “double bottom,” a sign that it may be safe to build back positions.

Most Read from Bloomberg Businessweek