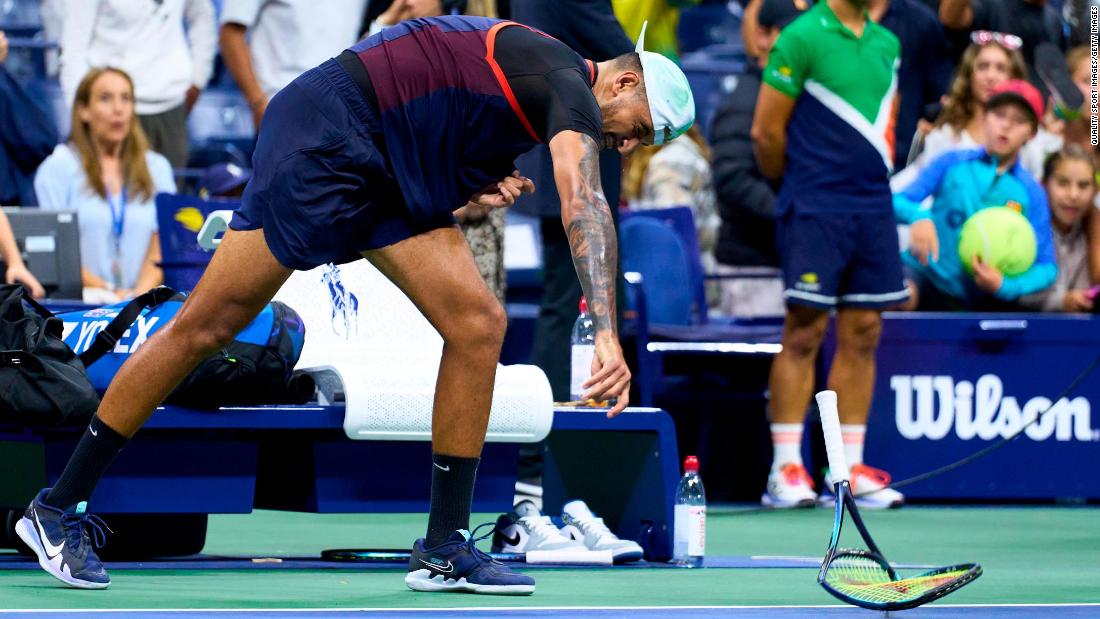 And, as he crashed out in a five-set epic to Russia’s Karen Khachanov in the quarterfinals, Kyrgios’ frustration at such an opportunity slipping away simmered over: he smashed two rackets on the floor, buckling their frames beyond use.

“I honestly feel like sh*t,” Kyrgios told reporters. “I feel like I’ve let so many people down. These four tournaments [the grand slams] are the only ones that ever are going to matter. It’s just like you’ve got to start it all again. I have to wait till the Australian Open. It’s just devastating. Like, it’s heartbreaking. Not just for me, but for everyone that I know that wants me to win.”

The first set flashed past in 35 minutes, dominated by both players’ big serves until a couple of errors in Kyrgios’ final service game gave Khachanov the break and the set.

An enforced break followed as the Australian took a medical timeout for treatment on his left knee before he rallied to level the match in the second set.

“Obviously I’ve been playing a lot of tennis the last couple months … I just split-stepped and just tweaked it a little bit,” he later said about his knee. “Ended up feeling fine. I got some Deep Heat on it. Everyone is carrying a bit of a niggle right now.”

Kyrgios’ momentum seemed to spill over into the third set as he engineered two break points in Khachanov’s opening service game, then another two at 4-4. He failed to convert any of these opportunities, however, and it was Khachanov who seized his chance to break at 6-5 and retake the lead.

Frustrated by losing this set, Kyrgios smashed a bottle of water during the changeover and received a warning for unsportsmanlike conduct.

The 27-year-old has already been fined $18,500 for four separate offenses at this year’s US Open, including spitting, swearing and smashing his racket, according to Reuters.

Although Kyrgios forced a fifth set, Khachanov broke in the opening game, saved break points in his next two service games and closed out the match to advance to the semifinals of a grand slam for the first time. He will now face Casper Ruud on Friday for a place in the US Open final.

“I’m super happy, super proud that I could finish the match, I could take it,” Khachanov said. “Serving for the match [is] never easy. Yeah, just super happy to do this step forward to make my first semifinal.”

It also marked the end of Kyrgios’ most successful year in grand slams following his run to the Wimbledon final in July.

“That’s all people remember at a grand slam, whether you win or you lose. I think pretty much every other tournament during the year is a waste of time really. You should just run up and show up at a grand slam, that’s what you ‘re remembered by.”