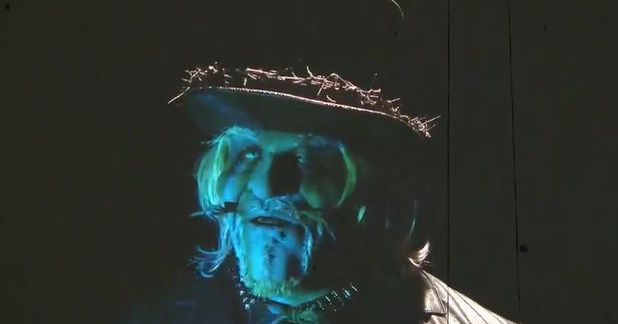 Bray Wyatt was back on SmackDown last night (Oct. 28). He closed out the show, the third time he’s done that since coming back in that spot at Extreme Rules.

The former WWE and Universal champion again spoke about his issues. Wyatt’s emotional and mental health has been a theme throughout his return run, and this promo built on the psychological profile that was one of last Friday’s easter eggs. Bray either feels too much or too little, and that’s taken him to some dark places and led him to do some horrible things. But he continued to describe what we’re seeing now as the best version of him, even though he’ll likely do horrible things again in the future.

It was mostly a recap of what he’s said in his other two recent promos, delivered in Windham Rotunda’s signature charismatically arcane style. What we got more of this time was the character who’s been cutting off and responding to Bray… a character we can now officially call Uncle Howdy.

Howdy is someone in a fairly rough-looking mask* that seems to also sometimes wear another mask (which looks a whole lot like the one we saw Bray take off in Philadelphia last month when he returned). In another callback to a recent hidden clue, he refers to himself as “the ghost of the man who sold the world”. And with Wyatt seemingly being “the man who sold the world,” that makes Howdy Bray’s ghost, I guess?

The big takeaway here is that Wyatt is a liar. He claims to be showing us his true self without any masks, but Howdy says he’s still wearing one. What Bray calls the best version of himself, his “Uncle” says is just a shell of his former greatness — likely because Wyatt sent “him” away (the screen quickly flashes to what looks The Fiend as Howdy delivers this line).

Our newest QR code backs Howdy’s claims. It takes us to this image that’s reminiscent of something The Riddler would have sent one of his targets in Matt Reeves’ TheBatman…

And the source code of the image eerily proclaims the person responsible can “see” the real Wyatt underneath his mask of normalcy.

Whether or not the character is eventually played by someone else, it still seems pretty clear to me that it’s Windham Rotunda providing the voice at this point, and that at least the initial program for Bray Wyatt’s latest WWE run will be a feud with himself. How we get there is anyone’s guess at this point.

Guesses are coming fast and furious, of course. Many have to do with Rotunda’s real life family. Lots of people have pointed out the Howdy mask’s resemblance to Bray’s uncle and namesake, Barry Windham:

And some think the fact we could see a cross earring on Uncle Howdy was an intentional tease of Bray’s supposedly returning brother, Bo Dallas:

One theory floating around would have rumored signees Vincent & Dutch playing Uncle Howdy-aligned characters who want Bray to backslide to his Fiend-ish ways, with Bo & Barry Windham showing up as the yet-to-be-revealed Uncle Harper’s soldiers in a was for Wyatt’s soul.

Which, as critics and others understandably jaded after the way WWE’s presented Bray’s ideas in the past are pointing out, could be a big mess! But we also don’t know where anything is going a month into this run. And for folks who dig this kind of immersive storytelling and/or are just intrigued by the attempt to do something different than a traditional pro wrestling angle, it’s pretty cool. Plus, Wyatt hasn’t even hinted at getting involved with anything else on SmackDownso if this isn’t for you, it remains easy to skip.

So if you’re into it, give us your guesses! If you’re not, enjoy what will apparently be a Wyatt-free Crown Jewel!

* It made me think of this sketch from Tim Robinson’s brilliant I think you should leave. Which on the one hand really kills the vibe Bray & company are going for. But on the other I could totally see Uncle Howdy despondently saying “We did too much… I don’t even want to be around any more.”