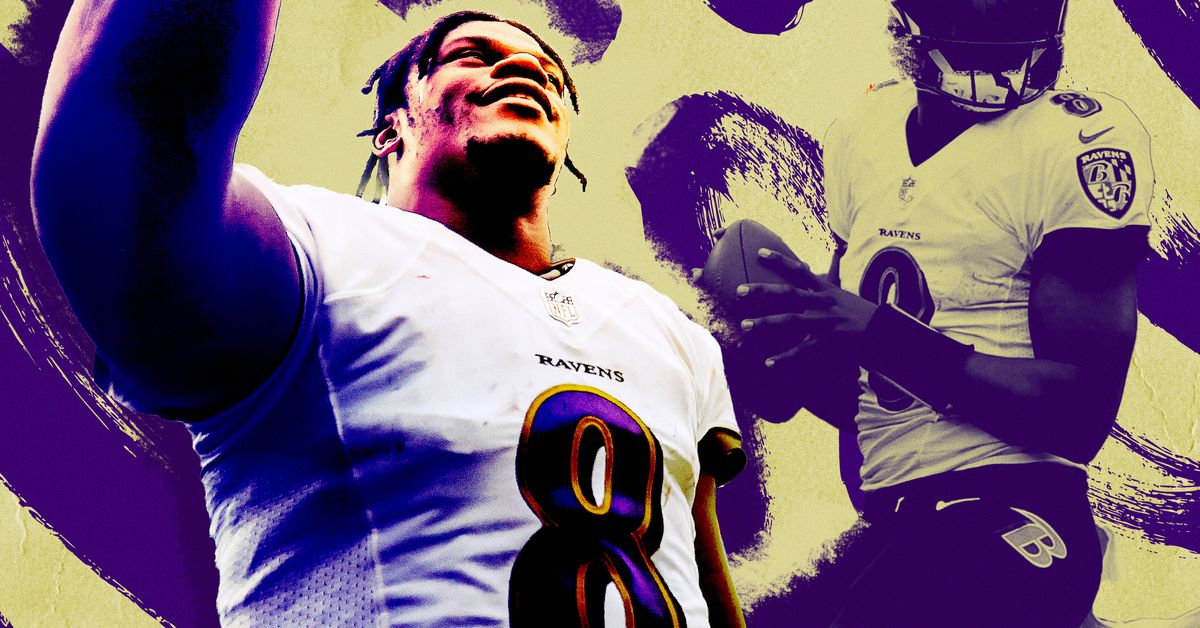 The Baltimore Ravens offense is getting a lot of good press on the heels of its 37-26 win in New England last Sunday, and understandably so. It now leads the NFL into several major categories, including passing yards, points, and DVOA. Quarterback Lamar Jackson leads the league in touchdown passes and passer rating and now has the second-best MVP odds behind only Josh Allen. It’s starting to feel like 2019, when Jackson won that award unanimously and Baltimore led the NFL in scoring.

But let’s just skip right on past that pretense. For as fun as it’s been to watch this unit put up points, and as good as Lamar has been carrying a banged-up offensive line, painfully thin receiving corps, and disjointed defense on his back while producing stats like this …

Lamar Jackson has accounted for 85.4% of the Ravens total yards this season (via passing and rushing), leading the NFL.

… we have to ask: How sustainable can this one-man offense possibly be?

The overall metrics suggest Baltimore’s passing game has taken a major step forward this season—the team is currently first in pass DVOA and sixth in pass EPA after finishing 16th and 19th, respectively, in those two metrics in 2021. And the Ravens have improved in a couple of key areas that have hurt them in the past. They’re cooking defenses that try to blitz them this season: Lamar is averaging over 11 yards and 0.97 EPA per dropback when opponents blitz him, per TruMedia. Both numbers lead the league. And the 25-year-old has been more proactive sorting out pass protection issues before the snap, which has led to dramatically lower pressure and sack rates. Jackson’s also making quicker, better decisions after the snap.

Lamar Jackson and Rashod Bateman doing a nice job of sight adjusting against the Dolphins 3rd down CB blitz.

Because they recognize it so quickly and know what to do, the safety is too far away to make a play. It’s a simple pitch & catch and easy first down for the Ravens. pic.twitter.com/TDnUzNVk0l

The Ravens have also been better in the red zone in 2022 after posting average results last season. They’ve scored touchdowns on eight of their 10 red zone trips—only two teams have found the end zone at a higher rate, per TruMedia. That success is thanks to well-designed plays like this shovel pass to Mark Andrews that kicked off the scoring in the win over the Patriots.

Plus, Baltimore is using a concept it had mostly ignored over the first few years of the Lamar era—lining up under center—and to great effect. The Ravens have lined up under center 32 times through the first three weeks of 2022. That happened just 60 times in 2021, and that schematic addition has served as a booster shot for the play-action passing game. Jackson ranks second in yards per dropback and third in EPA on play-action dropbacks, per TruMedia.

This is all very encouraging, and maligned offensive coordinator Greg Roman deserves some credit for expanding his playbook over the offseason to help spark improvement in those areas. But some key underlying numbers suggest this league-leading offense is really just a house of cards that’s being propped up by Lamar’s individual brilliance. And so far, the answer to the most pressing question facing Roman and his offense this year—can it put together a fully functional dropback passing game that isn’t solely powered by Lamar’s unique mobility?—is no.

In order to illustrate how dependent Baltimore has been on Lamar’s legs over the first three weeks of the season, let’s break down how the offense is moving the ball. Outside of the red zone, the Ravens currently rank eighth in total EPA, per TruMedia. But how much of that is just Lamar? Take scrambles out of the equation and the Ravens drop down to 11th. Only four passers have generated more production on scrambles. And if you take out QB runs altogether, the Ravens drop to 15th. What that means is: The offense has been elite when Lamar ends up running with the football. When the ball ends up in someone else’s hands, it’s been about average—and that’s not even giving Lamar credit for the attention he attracts in the run game when he doesn’t have the ball in his hands. Then, when you exclude scrambles, designed QB keepers, other read-option plays, the Ravens rank last in EPA per rush and 30th in success rate.

Having the quarterback read an unblocked defender tilts the numbers back toward the offense’s favor—and linebackers’ eyes are constantly glued to Lamar when he’s a threat to run—which gives Roman a privilege that few coordinators enjoy to this extent. But when Baltimore has run from under center, which eliminates the quarterback run threat, the results are ugly.

The Ravens Can’t Run From Under Center

So those ultra-productive play-action passes from under center that we talked about earlier? They come at a cost. In order to get defenses to play the necessary single-high safety coverages that make them effective, the Ravens have to present a credible run threat by actually running the ball. If they just fake a handoff every time, the novelty will wear off and defenses will adjust. But the under-center runs have been so bad they’ve completely offset all the production they’ve gotten from the passes. Baltimore’s EPA on all under-center play actually ends up in the negatives.

Baltimore’s under-center offense has been a net negative

The concerns don’t end there. While the passing game has been very productive on early downs, that hasn’t been the case on third down. The Ravens rank a mediocre 23rd in success rate on third-down dropbacks, per RBSDM.com, which means Baltimore hasn’t been able to pass when the defense knows it’s coming. That’s a prerequisite for winning in today’s NFL.

It wouldn’t be fair to pin the issues in obvious passing situations on Jackson, because he’s not playing in the same environments that his peers are. While teams around the league are loading up on talented wide receivers, the Ravens came into this season with just two that they’re willing to play consistently: Rashod Bateman and Devin Duvernay. And so far, Lamar has played only 15 pass snaps with three or more receivers on the field, per TruMedia. That ranks last in the league behind even Jimmy Garoppolo, who has started only one game.

Instead of fielding speedy pass catchers, the Ravens are giving passing-down snaps to guys like Patrick Ricard, a fullback built like a La-Z-Boy recliner, and tight end Josh Oliver, who’s currently averaging 4.0 yards per reception. Roman dictates who’s out on the field, so he’s an easy target for blame, but it’s not like he has a lot of options. Demarcus Robinson is WR3 on the depth chart, but isn’t much of a route runner and has a track record of drive-killing drops from his time in Kansas City. James Proche and Tylan Wallace, two former Day 3 draft picks, round out the rest of the corps, and they’ve combined for 20 career catches over three professional seasons.

Even factoring in that dearth of talent, though, Roman isn’t doing a good job of featuring his best wide receiver, 2021 first-round pick Bateman. The second-year pass catcher has made the most of his opportunities, averaging 3.1 yards per route run, which ranks fourth in the NFL, per Pro Football Focus. But he’s been targeted only 16 times through three games. In the offseason, Roman said that he had added some new routes to the offense that would “showcase” Bateman specifically, but over half of the wideout’s routes have been short hitches or go routes on the left side of the field.

Those are typically used as decoys—the go routes to take the top off the coverage, and the hitches to draw second level defenders to open up the intermediate areas—but the Ravens have their best dude running them. So even if Bateman’s winning on them, Lamar’s eyes are elsewhere by design.

For the Ravens to remain near the top of the league’s offensive charts—and the AFC North standings—this current setup will have to change. The offense has to be better outside of the red zone and on third down, the run game has to be better when Lamar isn’t carrying the ball, and Bateman has to be featured more often. Right now, the offense is far too dependent on its quarterback to create on his own, which makes for a nice MVP narrative but isn’t conducive to winning games over the long haul.

Eventually, defenses will adjust and make it harder for Lamar to keep this act up. Will somebody—whether it’s Roman, Bateman, or maybe an acquisition the front office has yet to make—be there to pick up the slack when that time comes? Or will Lamar be forced to do it all once again, for a team that has yet to commit to him long term?