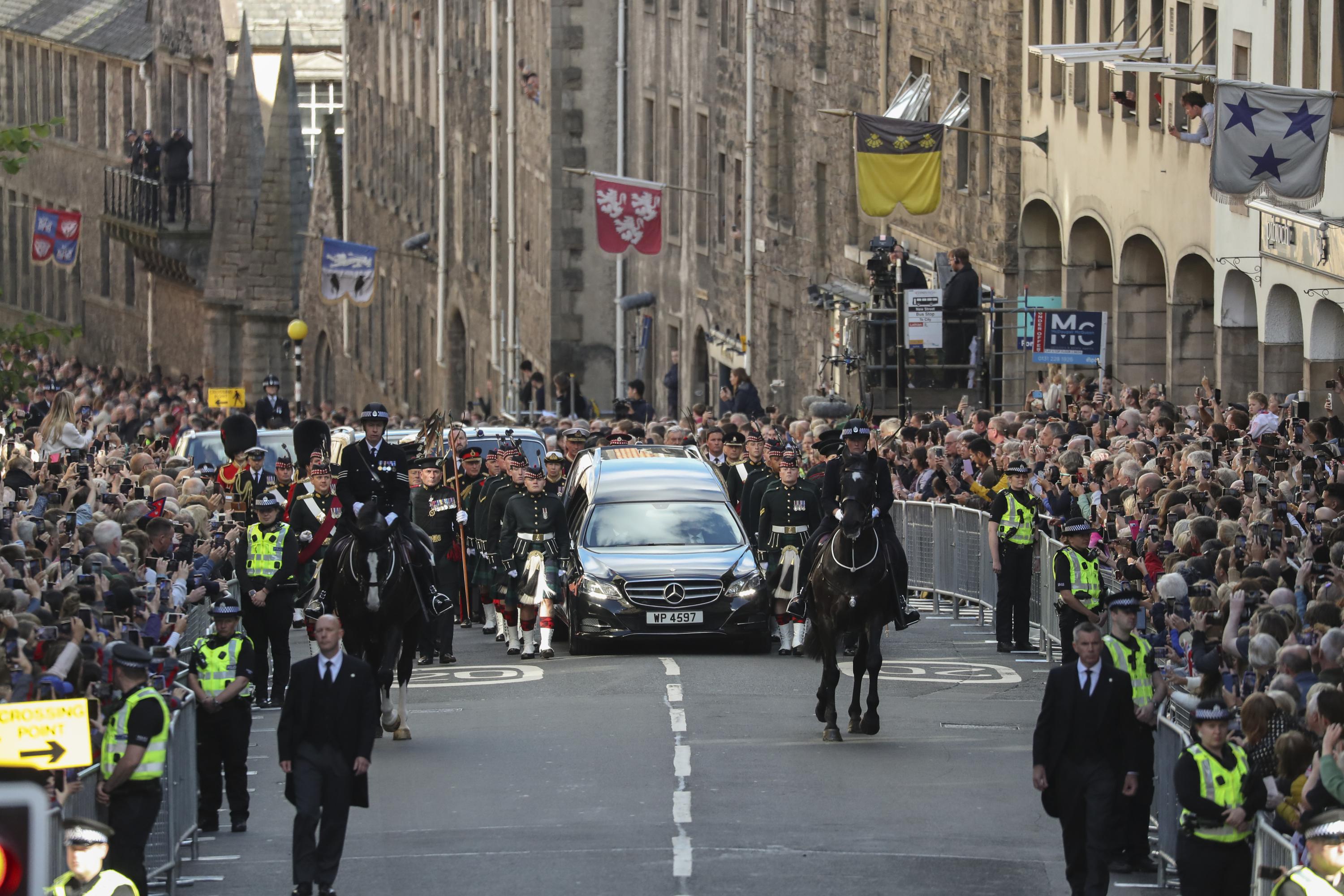 EDINBURGH, Scotland (AP) — With her four children walking silently behind the hearse, Queen Elizabeth II’s flag-draped oak coffin made the solemn journey Monday along a crowd-lined street in the Scottish capital to a cathedral for a service of thanksgiving for her 70-year reign.

Four days after the 96-year-old monarch died at her beloved Balmoral Castle in the Scottish Highlands, a military bagpiper played as the queen’s coffin, draped in the royal standard, was carried from the Palace of Holyroodhouse in Edinburgh and placed in a hearse.

King Charles III, dressed in army uniform, and Princess Anne, Prince Andrew and Prince Edward walked behind as the hearse traveled to St Giles’ Cathedral flanked by a bearer party of the Royal Regiment of Scotland and a detachment of The King’s Body Guard in Scotland, the Royal Company of Archers.

Charles, Anne and Edward all wore military uniforms, but Andrew did not. The Royal Navy veteran was stripped of his honorary military titles and was removed as a working royal over his friendship with the notorious US sex offender Jeffrey Epstein.

The coffin will remain at the cathedral until Tuesday so members of the public can pay their respects.

One man appeared to shout angrily at the hearse as it passed, while others called out: “God save the king!” But the procession was greeted mostly with a respectful silence under blue skies flecked with white clouds.

Earlier, a car carrying Charles and his wife Camilla passed the huge crowds of people who were packed behind metal barriers along the Royal Mile, the road between Holyroodhouse and St Giles’ Cathedral. Onlookers clapped and waved as the king’s limousine passed.

On their way, they passed large crowds of people who were packed behind metal barriers along the Royal Mile, the road between Holyroodhouse and St Giles. Onlookers clapped and waved as the king’s limousine passed.

Charles and Camilla got out of their car at Holyroodhouse and greeted people, and looked at floral tributes before a gun salute boomed from Edinburgh Castle.

Earlier, in London, Charles received condolences at Parliament and told lawmakers he would follow his late mother’s example of “selfless duty.”

The queen’s grandson, Prince Harry, hailed her as a “guiding compass” and praised her “unwavering grace and dignity.”

The government, meanwhile, announced that the nation will observe a minute of silence on Sunday, the evening before the queen’s funeral. The “moment of reflection” will take place at 8 pm (1900 GMT). People were encouraged to mark the silence at home or at community events.

Hundreds of lawmakers crowded into the 1,000-year-old Westminster Hall at the Houses of Parliament for the service, rich in pageantry, in which Parliament offered its condolences to the king, and he replied.

A trumpet fanfare greeted the king and Camilla as they entered the hall, which was packed with hundreds of legislators.

Charles told members of the House of Commons and House of Lords that he would follow his late mother in upholding “the precious principles of constitutional governance” that underpin the UK’s political system.

The hall, with its magnificent hammer-beam roof, is the oldest part of the parliamentary complex — a remnant of the medieval Palace of Westminster that once stood on the site.

“As I stand before you today, I cannot help but feel the weight of history which surrounds us and which reminds us of the vital parliamentary traditions to which members of both Houses dedicate yourselves, with such personal commitment for the betterment of us all,” Charles said.

The ceremony was held in Westminster Hall because monarchs are not allowed inside the House of Commons. That rule dates from the 17th century when King Charles I tried to enter and arrest lawmakers. That confrontation between crown and Parliament led to a civil war which ended with the king being beheaded in 1649.

Earlier Monday, a personal statement posted on Harry and his wife Meghan’s Archwell website said he cherished their times together “from my earliest childhood memories with you, to meeting you for the first time as my Commander-in-Chief, to the first moment you met my darling wife and hugged your beloved greatgrandchildren.”

Amid acrimony in the House of Windsor, Harry quit as a senior royal and moved to the US two years ago. On Saturday, there was a possible sign of a reconciliation as Harry and Meghan joined his brother Prince William and sister-in-law Catherine in meeting mourners outside Windsor Castle.

The national outpouring of grief continued Sunday as thousands of people lined streets and roadsides as the oak coffin was borne from the late queen’s beloved Balmoral Castle summer retreat, where she died on Thursday, to Edinburgh.

In Edinburgh, the king will walk behind his mother’s coffin as it is slowly transported from Holyroodhouse to St. Giles’ Cathedral, where the crown of Scotland will be placed on the coffin ahead of a service of prayer and reflection on the life and 70- year reign of the widely cherished monarch.

The queen’s coffin will lie at the cathedral for 24 hours, giving members of the public a chance to file past and pay their respects. On Tuesday, it will be flown to London where the coffin will lie in state at the Houses of Parliament Palace from Wednesday afternoon until the morning of the funeral on Sept. 19.

Authorities already have issued rules and guidelines for people wanting to pay their respects in London, with a long queue expected.

After visiting Scotland, Charles embarks on a tour of the other nations that make up the United Kingdom — he visits the Northern Ireland capital, Belfast, on Tuesday and Wales on Friday.

Harry’s statement ended on a poignant note alluding to the death last year of his grandfather, Prince Philip, saying that “We, too, smile knowing that you and grandpa are reunited now, and both together in peace.”

Follow all AP stories on the death of Queen Elizabeth II and Britain’s royal family at https://apnews.com/hub/queen-elizabeth-ii