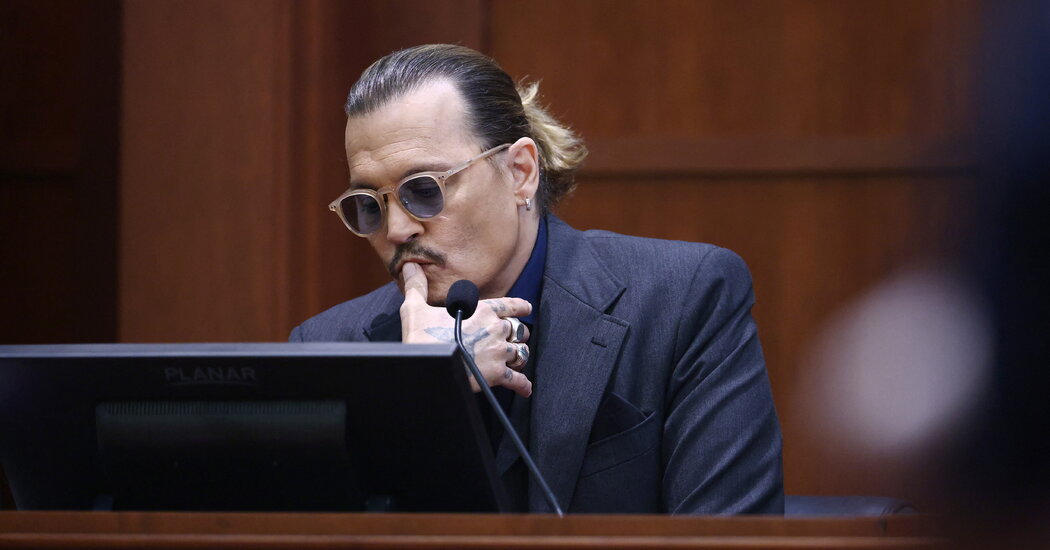 Lawyers for Amber Heard worked on Thursday to point out inconsistencies in Johnny Depp’s testimony in the defamation trial between the formerly married actors, presenting text messages sent by Mr. Depp and audio recordings of the couple’s arguments.

Ms. Heard has asserted in court papers that Mr. Depp repeatedly assaulted her throughout their marriage, including during a fight in 2015 in which she said he “reeled back” and head-butted her in the face, “bashing” her nose. Mr. Depp has testified that he never struck Ms. Heard during their relationship and accused her of being the aggressor.

Mr. Depp said on the stand Thursday that he vehemently disagreed that he had head-butted Ms. Heard that night, saying that he was only trying to restrain her and that it was “not impossible for them to bump.”

Confronted with a recording of himself saying, “I head butted you in the forehead,” using an expletive, and “That doesn’t break a nose,” Mr. Depp said he had been trying to place Ms. Heard by repeating her version of events.

“There was not an intentional head butt,” the actor said, “and if you want to have a peaceful conversation with Ms. Heard, you might have to place just a little bit.”

The trial in Fairfax County Circuit Court revolves around an op-ed Ms. Heard wrote in 2018 for The Washington Post in which she said she was a “public figure representing domestic abuse.”

But the trial testimony has gone well beyond an analysis of what Ms. Heard wrote. It includes a lengthy review of physical altercations between the actors, the differing accounts they have given about each and an extensive review of Mr. Depp’s use of drugs and alcohol.

On Thursday, a lawyer for Ms. Heard, Ben Rottenborn, had Mr. Depp recall how he wrote bloody messages on the wall and other objects after part of his finger was severed in 2015.

In his testimony, Mr. Depp affirmed that he had written a message on a mirror with his injured finger that referred to Ms. Heard — then his wife — as “easy Amber,” and another on a lampshade that said, “Good luck and be careful at the top.”

“I thought it was good advice,” Mr Depp replied.

But what the two sides disagree on is how Mr. Depp’s finger was severed, while the couple were in Australia for the filming of the fifth “Pirates of the Caribbean” movie.

Mr. Depp has testified that Ms. Heard threw a handle of vodka, which shattered on his hand and severed his finger. In court papers, Ms. Heard has said he severed his own finger when smashing a phone “to smithereens” amid a bout of physical violence against her.

Ms. Heard — who is countersuing Mr. Depp for defamation after his former lawyer called her accusations a hoax — has written in court papers that Mr. Depp’s drug and alcohol use was central to the cycle of abuse, writing, “Johnny would become volatile and violent when under the influence of drugs and alcohol, then contrite and apologetic when he would sober up.”

Mr. Depp testified on Tuesday that Ms. Heard’s depiction of his drug and alcohol use was “grossly embellished” and that he was once addicted to an opioid but had successfully detoxed.

Parts of the cross-examination from Ms. Heard’s lawyer sought to show that Mr. Depp had misrepresented his drug use.

Mr. Rottenborn questioned Mr. Depp about a particular incident in 2014 on which the actor’s account diverges from Ms. Heard’s. She has written in court papers that Mr. Depp had been “drinking heavily” on a private flight and threw objects at her, screamed obscenities and kicked her in the back. He was angry, she said, about a romantic scene she had been filming with the actor James Franco. She said he then locked himself in the plane’s bathroom and passed out, according to court papers.

Mr. Depp testified on Wednesday that he had taken opioids and had perhaps had a glass of champagne on that flight, adding that he had locked himself in the bathroom because Ms. Heard had been “actively searching for a way to instigate a fight with me .” Ms. Heard has said in court papers that she has never struck Mr. Depp except in self-defense or in defense of her sister.

In the courtroom. A defamation trial involving the formerly married actors Johnny Depp and Amber Heard is currently underway in Fairfax County Circuit Court in Virginia. Here is what to know about the case:

Ms. Heard’s op-ed. Mr. Depp’s suit was filed in response to an op-ed Ms. Heard wrote for The Washington Post in 2018 in which she described herself as a “public figure representing domestic abuse.” Though she did not mention her former husband’s name, he and his lawyers have argued that she was clearly referring to their relationship.

The domestic abuse claims. In the 2020 trial, Ms. Heard accused her former husband of assaulting her first in 2013, after they began dating, and detailed other instances in which he slapped her, head-butted her and threw her to the ground. Mr Depp has since accused him of punching him, kicking him and throwing objects at him.

Mr. Rottenborn sought to suggest Mr. Depp’s behavior had been more volatile than he had acknowledged, confronting him with a text message he had sent to a friend, the actor Paul Bettany, in reference to the flight. In the text, Mr. Depp rattled off an exaggerated list of the drugs and alcohol he had ingested and said they left him “screaming obscenities and insulting” anyone who got near.

Mr. Depp suggested in response that there was a certain creativity to the way he speaks in text messages.

“When I write a text, especially if I’m in a particularly impassioned place, it’s a canvas, it’s a painting,” Mr Depp said. “You choose your colors.”

Mr. Rottenborn questioned Mr. Depp on the drugs he used and with whom, prompting the actor to say — in a comment that drew laughs from the courtroom — “I once gave Marilyn Manson a pill so that he would stop talking so much.”

During cross-examination, Mr. Depp was confronted with several text messages to others in which he referred to Ms. Heard using insults and obscenities, including calling her a “worthless hooker.”

Taking a pair of tinted glasses on and off to read the evidence, Mr Depp sometimes appeared mildly perturbed as Mr Rottenborn cut off his responses for time — at one point commenting, “Well, I don’t feel like I’m wasting anyone’s time, sir.”