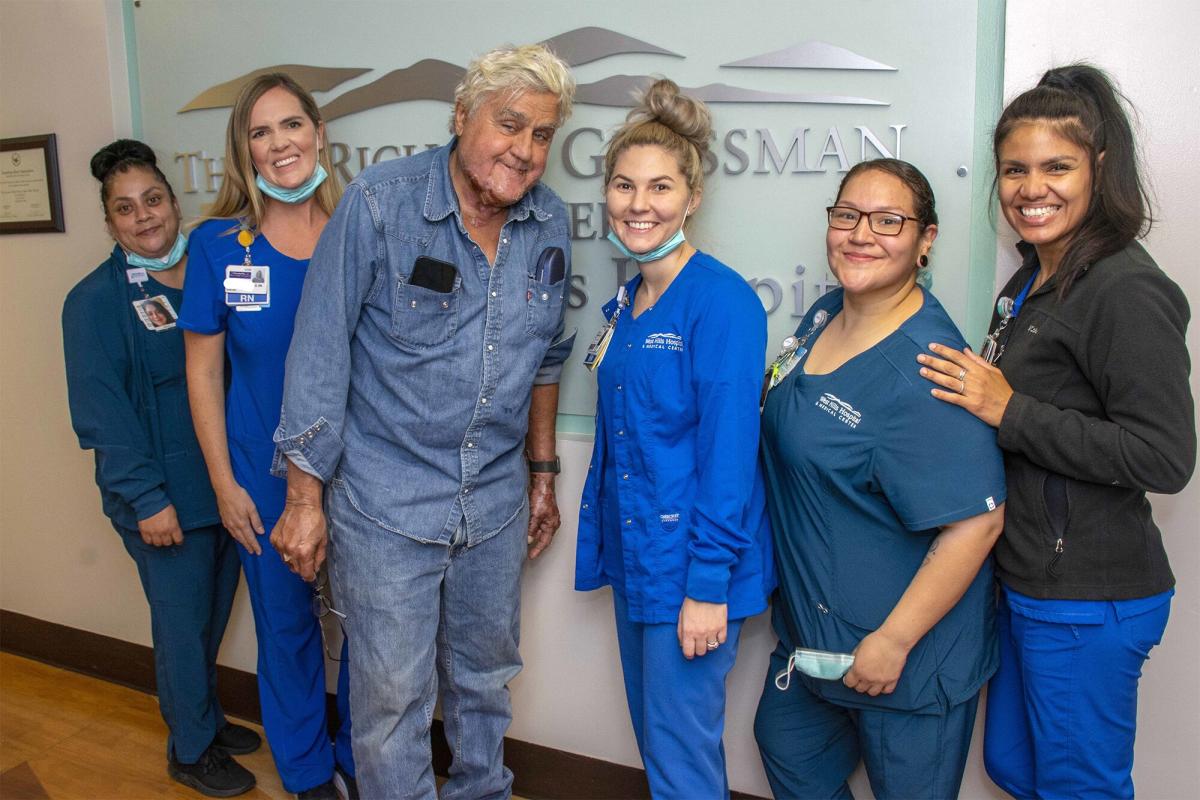 The former tonight show host, 72, was discharged from Grossman Burn Center in the Los Angeles area on Monday, nine days after he suffered “serious burns” in a garage gasoline fire. Center staff shared an image of the smiling comedian alongside several of his caretakers.

“Comedian Jay Leno was released from the Grossman Burn Center today,” doctors shared in a release obtained by PEOPLE on Monday. “After a 10-day stay at the facility, Jay will receive follow-up care at the Grossman Outpatient Burn Clinic for burns to his face, chest and hands he received during a fire at his home garage. Jay would like to let everyone know how thankful he is for the care he received, and is very appreciative of all of the well wishes. He is looking forward to spending Thanksgiving with his family and friends and wishes everyone a wonderful holiday.”

Within the statement, his physician Dr. Peter Grossman added, “I am pleased with Jay’s progress, and I am optimistic that he will make a full recovery.”

Leno underwent treatment involving surgical excision and grafting procedure, which removes unhealthy tissue in an effort to promote wound healing and reduce the risk of infection. Grossman said that with Leno’s burns, “much of the thickness of the skin was injured” in some areas, so unhealthy tissue was being removed.

Never miss a story — sign up for PEOPLE’s free daily newsletter to stay up-to-date on the best of what PEOPLE has to offer, from juicy celebrity news to compelling human-interest stories.

RELATED: What to Know About Jay Leno’s Burn Treatments and Skin Grafting Procedure

Two days after the incident, Leno spoke publicly for the first time since enduring the “serious medical emergency” that left him with “significant” second- and third-degree burns on his face, chest and hands, according to his doctor.

“I got some serious burns from a gasoline fire,” he said in a statement shared with PEOPLE. “I am okay. Just need a week or two to get back on my feet.”

According to a press release from the Burbank Fire Department, which was obtained by PEOPLE, the incident occurred on Nov. 12 around 12:30 pm BFD officials said they arrived on scene, where they “assessed and treated one adult male patient” before transporting him to “a local emergency department.”

Aimee Bennett, a spokesperson at the Grossman Burn Center, also issued a statement to PEOPLE, confirming that Leno was being treated there after the incident in his garage.

“Jay wants everyone to know that he is in stable condition and receiving treatment … for burns that he received to his face and hands from a gasoline accident in his garage over the weekend,” Bennett said. “He is in good humor and is touched by all the inquiries into his condition and well wishes. [He] wants to let everyone know he is doing well and is in ‘the best burn center in the United States.’ “

Leno, a known car aficionado and the star of Jay Leno’s garage, which was working on a steam engine underneath a car in his garage when the fire began. The comedian was pulled from underneath the car before being transported to the Burn Center and treated for his injuries.

dr Peter Grossman, medical director at the Grossman Burn Center, said last week that Leno was in good condition after undergoing a surgical excision and grafting procedure for his burns.

“Some of the burns to the face are a little deeper and a little more concerning,” Grossman said. “Currently, there’s no evidence of nerve damage.”

The doctor added, “I do anticipate him making a full recovery. Whether they’ll be remnants of this injury, it’s still too early to tell. I’d say that his injuries are serious, his condition is good.”