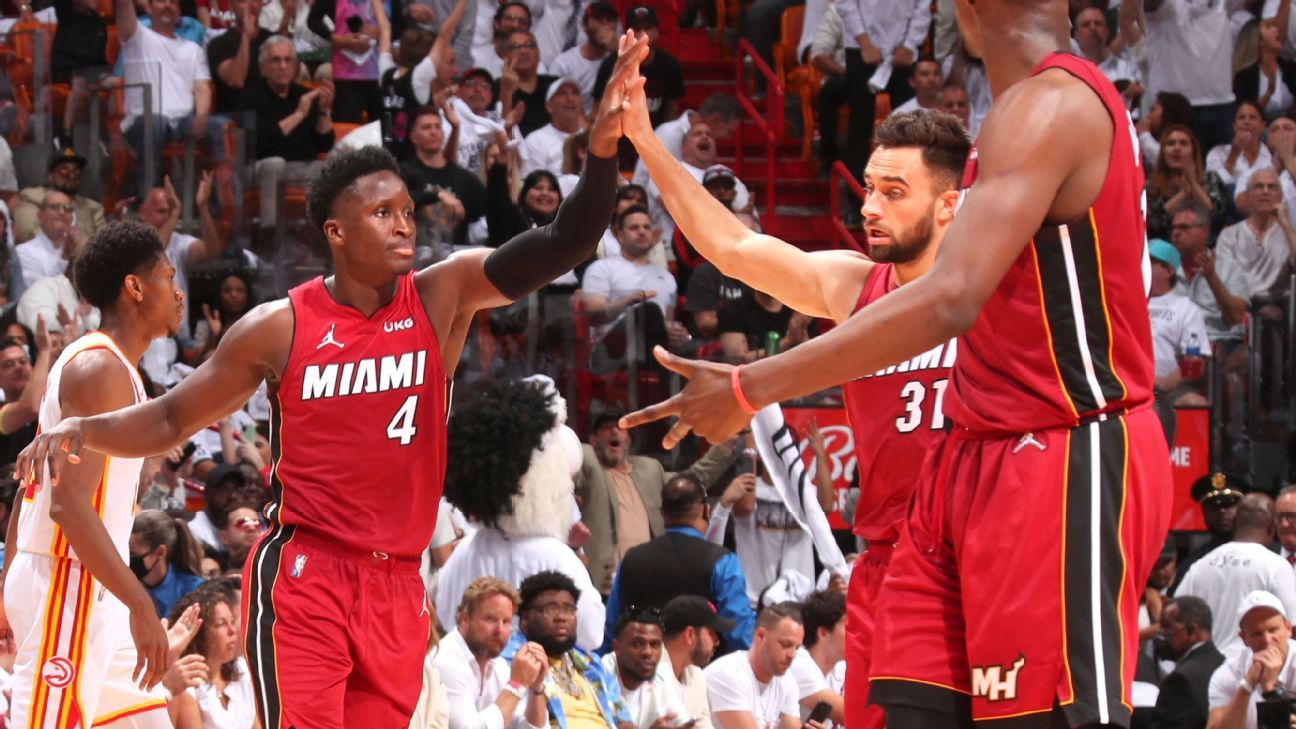 MIAMI — The Heat were missing two of their starters yet hardly missed a beat in Tuesday’s 97-94 Game 5 win over the Atlanta Hawks to advance to the second round of the NBA playoffs.

With Kyle Lowry sidelined since late in the third quarter of Game 3 because of a left hamstring strain and Jimmy Butler in street clothes because of inflammation in his right knee, Miami got a lift from an unlikely pair of replacements.

Victor Oladipo, who appeared in just 96 out of a possible 309 regular-season games the past four years because of knee and quadriceps injuries, and Max Strus, who was undrafted and appeared in just two games total with the first two teams he was with in the NBA, picked up the slack to help the Heat clinch their first playoff series at home since 2016.

Oladipo, who scored more points in the first five minutes of the first quarter (eight) than he had in the first four games of the series (six), finished with 23 points on 8-for-16 shooting.

Strus finished with 15 points and went on a personal 10-0 run from the 2:29 mark of the second quarter until there was 1:22 left in the half, turning a one-point Miami deficit into a nine-point cushion that the Heat pushed to 12 by the break.

Not to mention Bam Adebayo’s 20 points on 7-for-11 shooting and 11 rebounds, which included a crucial dunk with 59.2 seconds left off an Oladipo feed that doubled the Heat’s lead from two to four to help stave off a late Atlanta rally.

Of course, it was a total team effort from a Heat squad accustomed to plug and play — Miami used 23 different starting lineups during the regular season en route to the Eastern Conference’s No. 1 records

And that team cohesion was on full display on the defensive end, where Miami capped off a tortuous series for Trae Young by holding the Atlanta star to 11 points on 2-for-12 shooting (0-for-5 from 3) and six turnovers .

Young finished with more turnovers (30) than made field goals (22) in the five games and three of his four lowest point totals all season.

Miami put the finishing touches on the win with a signature stop, not even allowing the Hawks to get off a shot attempt on their final possession when they had the chance to tie it with a 3 off an inbounds play coming out of a timeout with 5.2 seconds left.

Tyler Herro, one of the three finalists for Sixth Man of the Year, scored 16 points off the bench. It was his 11th career playoff game with at least 15 points as a reserve, extending his lead for the most such games in Heat franchise history, according to research by ESPN Stats & Information.

Miami will play the winner of the Philadelphia 76ers and Toronto Raptors’ first-round series, which the Sixers lead 3-2, guaranteeing at least a few days off for Lowry and Butler to rest up.