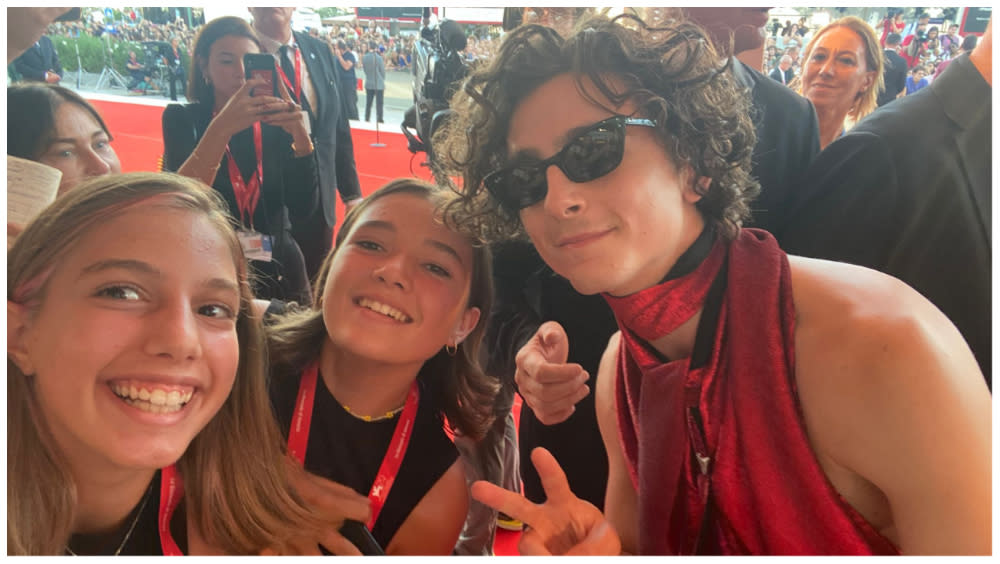 On July 26, the day the Venice lineup was announced, my 14-year-old daughter Emma started hounding me that I had to take her on the red carpet to see Timothée Chalamet. Eventually, I relented, even though I thought the movie, “Bones and All” — about two cannibals who fall in love — would be too gory for her. So we struck a compromise: We’d try to meet Chalamet (or “Timmy,” as he’s called) without going inside to see the film.

So there we were — Emma; her friend Nina, 13; and me — on a balmy late afternoon in a small reserved spot for journalists behind the red carpet, opposite the fans, waiting for our A-list sighting. And for a while it was pretty boring. The girls spotted “Outer Banks” star Chase Stokes; YouTuber Emma Chamberlain; Simone Ashley, whom they known from “Bridgerton,” and Italy’s Luca Argentero who stars in the local medical procedural “Doc.” For me the most exciting thing was seeing Venice chief Alberto Barbera’s gorgeous newborn baby daughter Thea, brought out on the red carpet by a nanny to get her first taste of stratospheric stardust, just like Emma.

Then we heard the orchestral roar of fans instantly whipped into a frenzy. The rush of excitement. The primordial din of mostly female screams that always reminds me of early Beatlemania. But no Timmy yet. Our view was obstructed by obnoxious onlookers on the carpet with a better vantage point.

We got our first glimpse of Chalamet in his backless blood-red jumpsuit on the giant screen. “He’s practically naked!” said Emma. Finally, he was in front of our eyes, working the crowd with rock star swagger and a big heart, waves of screams punctuating Timmy’s every move as he bathed in the crowd.

And then the most amazing thing. Chalamet came towards us. And Emma and Nina got a selfie from their favorite star.

Here is their take on why Chalamet represents the pinnacle of Gen Z cool.

Emma: he’s hot He’s a great actor, has a great character. He’s really nice with fans. He’s down to earth. You can tell he’s a beautiful person. I like to watch his interviews when I’m bored.

What are your favorite Chalamet movies?

Emma: “Little Women,” “Call Me by Your Name,” which I adored, and “Dune,” where’s he’s got great chemistry with Zendaya. I can’t wait for part two.

Nina: “Call Me by Your Name.” That was a tough role. He really made me feel the changes he he was going through in that movie.

Why did you so want to see him up close in Venice?

Nina: First off, he’s really hot. But it’s also because I’ve seen all his movies and, since I want to be an actress, the way he acts is an inspiration for me.

What’s so hot about Timothée Chalamet?

How did you feel when you first saw him?

Nina: We first spotted him arriving on the boat this morning, that was the start of the excitement. I went crazy. Then when he arrived on the red carpet and everyone started screaming, my heart was pounding.

And when you saw him on the red carpet?

Emma and Nina: He spent so much time with fans on the other side of the catwalk, we never thought we’d even get a close look. But it was great to see him engage with fans on the giant screen. He’s so generous. He was trying to make everybody happy. We even saw him ask security if he could make another round, and I think they said ‘no.’

How did you get the selfie?

Emma: He came towards us because there was a girl next to us who had prepared a fan letter and somebody told him. So we slid in next to her, and asked if we could take a picture. Nina’s hand was shaking, so we had to do it twice. He was so patient, he even said: “No problem.” Then we got really giggly, I was jumping up and down, and Nina started crying.