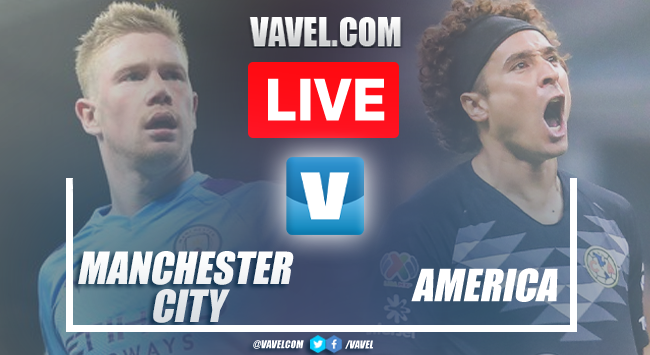 It’s over! Manchester City takes the win in this match against America.

America tries to generate danger, but MBetee at the back prevents them from getting there.

Damm’s service, but nobody appears and Ortega keeps the ball.

Martinez looks to generate danger, but the City defense is defending well.

Manchester seeks to generate danger, but Jimenez at the back ends up avoiding the third.

Goalkeeper! Grealish arrived with danger, but Jiménez ends up avoiding the third.

The action resumes for the second half.

Goal, goal, goal for Manchester City! De Bruyne scores to put the home side back in front.

Goal, goal, goal for America! Henry Martin arrived alone, Ortega came out and the ball ended up going in after an off-target shot.

Defensive header by Martin, preventing a dangerous arrival by Manchester.

Goal, goal, goal for America! De Bruyne’s shot from outside the box and Ochoa can’t keep out the first.

Fidalgo’s cross, but no one is able to finish the ball.

There was little excitement at the start of the match, and despite several chances, not much danger was generated.

The duel started off quite lively, with America looking for the opponent’s goal with insistence.

Both teams are already on the field warming up before the start of the match.

Manchester City is already inside the NGR, ready to look for one more victory in this preseason.

It’s not on free to air TV!

Tonight’s match will not be broadcast on Channel 9 like last Saturday’s game against Chelsea.

The fans, supporters of both teams, are already present at the NGR, ready to support their team.

Pep Guardiola declared prior to this match: “America is special because it plays with pure Mexican players. I have great admiration for Mexican soccer. When I was here, I was influenced by many coaches”. However, he made a mistake as he confused America with Chivas.

He will be able to see minutes!

Erling Haaland could see minutes in this match, making his debut in a Manchester City shirt.

The meeting was originally scheduled to kick off at 7:30, however it will start at 8 pm.

We’re back for minute-by-minute coverage of the match between America and Manchester City. We will shortly share with you the most relevant information, as well as the confirmed lineups.

Stay tuned for live coverage of Manchester City vs America

In a few moments we will share with you the starting lineups for Manchester City vs America live, as well as the latest information from the NRG Stadium. Keep an eye on the action with VAVEL’s minute-by-minute live online coverage of the match.

How to watch Manchester City vs America Live Stream on TV and Online?

What time is the Manchester City vs America friendly match this 2022?

How does America arrive?

How does Manchester City arrive?

The match will be played at the NRG Stadium.

The England Manchester City vs America match will be played at the NRG Stadium located in Houston, United States. The stadium has a capacity for 72,220 people.

My name is Lore Solórzano and I’ll be your host for this game. We will provide you with pre-game analysis, score updates, and news as it happens live here on VAVEL.