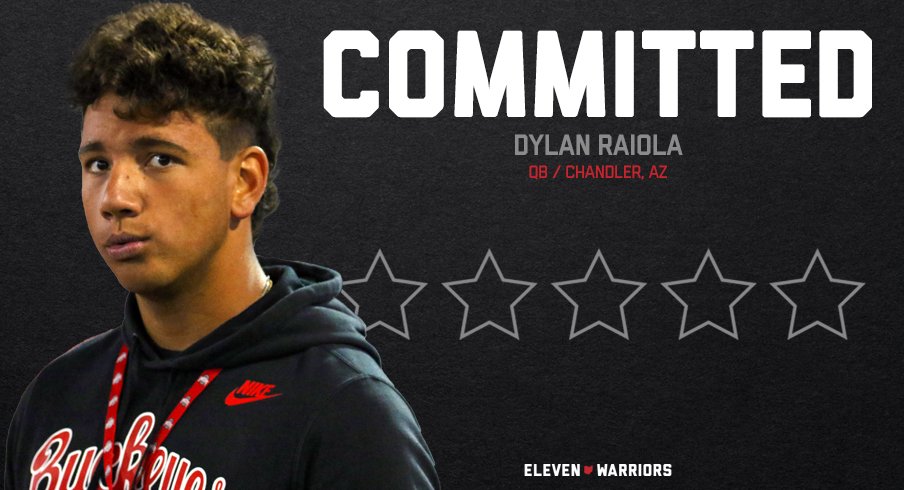 Not only has Ryan Day landed his first commitment in the 2024 cycle, he’s identified the quarterback of Ohio State’s future. Five-star Arizona signal caller Dylan Raiola gave his verbal commitment to OSU on Monday, his birthday, unofficially becoming the leader of OSU’s next recruiting cycle.

Raiola was offered by the Buckeyes on his first visit to Columbus in October when he visited Ohio State for the Penn State game, then returned April 1-3 for his second visit. With his family joining him, Raiola fell in love with what Ohio State could offer him, and built a bond with CJ Stroud and quarterbacks coach Corey Dennis while watching OSU’s student appreciation day practice.

That visit made such an impression on the Raiola family that they returned two weeks later for another visit during Ohio State’s spring game. It was on this visit Raiola felt comfortable enough to pull the trigger and end his recruitment almost a month later, giving OSU another top-tier quarterback waiting in the wings. Raiola picked the Buckeyes over USC, the top perceived challenger with Lincoln Riley in heavy pursuit, and a host of others including Alabama, Oregon and Georgia.

Raiola becomes the third composite five-star quarterback to commit to Ohio State in the last four years, joining Kyle McCord and Quinn Ewers (who has since transferred to Texas). Freshman quarterback Devin Brown was also ranked as the No. 1 overall prospect and a five-star recruit in the 2022 class by On3.

According to 247Sports’ composite rankings, Raiola is considered the No. 8 overall prospect and the third-best quarterback in the 2024 class. That said, 247Sports and On3 both rank Raiola as the No. 1 overall player in the 2024 cycle in their own rankings. Either way, Day has clearly called his shot, and is banking on Raiola to be a potential successor to either Kyle McCord or Devin Brown when his time comes.

Raiola has had no shortage of success early in his prep career. In 12 games for Burleson High School (Burleson, Texas) last season, Raiola completed 220 of 336 passes for 3,243 yards and 32 touchdowns with a passer rating of 122. On the ground, Raiola had 53 carries for 97 yards, but scored nine rushing touchdowns.

A big-bodied quarterback at 6-foot-3 and 225 pounds, Raiola is the son of Nebraska legend and former Detroit Lions center Dominic Raiola.