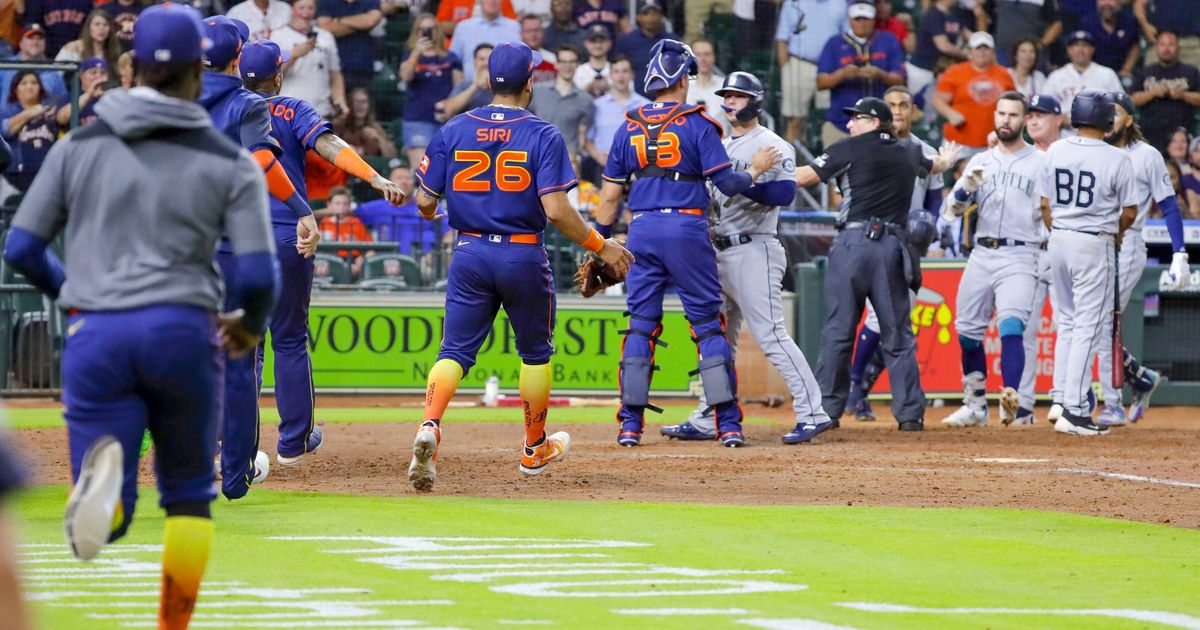 But two of the three teams they did that against were Baltimore and Texas — both with losing records — and Houston in Seattle.

So could the Mariners continue their roll in a ballpark they struggled in, against the runaway leader in the AL West and once again a title contender?

The answer, at least for a night, was yes. Even on a night when Robbie Ray, the reigning AL Cy Young Award winner, had problems again.

Cal Raleigh hit a three-run homer and drove in four runs, Julio Rodriguez hit a two-run blast and the bullpen was superb, leading the Mariners to a 7-4 win over the Astros on Monday night.

The game had a wild final inning, with three ejections and the benches clearing after the Mariners’ Ty France was hit by a pitch. But it was the work done much earlier that allowed Seattle to win.

“Interesting game tonight, I guess is the best way to put it,” Mariners manager Scott Servais said. “This place hasn’t been kind to us, and we need to turn it. Sometimes playing with a little emotion and playing on edge can help, and our guys responded there late in the game. It was a good win.”

The Mariners did not have history on their side.

They had won just four of their past 30 games at Minute Maid park, including getting swept in a three-game series last month.

If that wasn’t daunting enough, Houston starter Cristian Javier had not been scored on in three career starts against the Mariners, covering 18 1/3 innings. Javier threw 5 2/3 against Seattle in a 4-0 Houston win here May 3.

Seattle ended its drought against Javier in the first inning. Rodriguez hit a two-out single to center and JP Crawford drove him home with a double to left field.

It took Houston just three pitches to erase the deficit in the bottom of the inning. Jose Altuve destroyed a Ray fastball that was in the center of the strike zone, sending it well over the seats in left field for his 175th career homer.

The Mariners responded quickly. Adam Frazier led off the second inning with a walk. Dylan Moore, getting a rare start vs. a right-handed pitcher, was hit by a pitch with one out.

That brought up Raleigh, hitting .152. No matter. The Mariners catcher hit a line drive into the seats in right field for his sixth homer of the season, giving the Mariners a 4-1 lead.

“We are seeing the emergence of Cal Raleigh,” Servais said. “It’s coming together for him. He’s hitting the ball hard, with power, having really good at-bats.”

But Ray, last year’s Cy Young Award winner with Toronto, who signed a five-year $115 million contract with Seattle in the offseason, once again couldn’t hold a lead.

Homers by Kyle Tucker and Chas McCormick scored a pair, and Altuve knocked in an unearned run after a throwing error by Crawford at shortstop to tie the score at 4.

Raleigh came through again in the fourth inning. Adam Frazier led off the inning with a double, ending an 0-for-20 streak, but it looked like he might be stranded at second after Javier got the next two hitters out.

Enter Raleigh, who singled through the middle to score Frazier. After a Jesse Winker single, Javier’s night was done, having allowed five earned runs in 3 2/3 innings.

So, for the third time, Ray was given a lead to work with. On the first two occasions, the leads lasted one out. And that would have been the fate again had it not been for a great defensive play.

Altuve ripped a one-out single to right field, and Michael Brantley followed with a double that bounced off the wall in right field. Moore fielded the ball, made a nice throw to second baseman Frazier, who threw a one-hopper to Raleigh.

The catcher tagged out Altuve, who was trying to score from first base.

“The biggest play in the game was that relay throw when we threw the guy out at the plate,” Servais said.

Ray then worked a scoreless fifth inning, leaving the bullpen with a one-run lead.

That was the good news from his outing. The bad: Once again, he was hurt by a poor inning but he never was in a good groove, allowing the four runs on eight hits and three walks.

But he finished with three scoreless and it was good enough for him and the Mariners to win, thanks to the offense and stellar work from the bullpen.

“I will give Robbie a ton of credit because as ugly as it was early on, he tried to make some adjustments and was able to put three zeros for us,” Servais said. “That meant everything, allowing us to hang in there and win the game.”

Said Ray, “It seemed like they were on my stuff, so I knew I had to make an adjustment and I started mixing it up a little more.”

Penn Murfee pitched 1 2/3 innings scoreless. Ryan Borucki made his Mariners debut, getting Houston slugger Yordan Alvarez to ground out to end the seventh.

Sergio Romo worked out of trouble in the eighth, striking out the side.

The Mariners got some insurance when Julio Rodriguez hit a two-run homer in the ninth, right after France was hit by a pitch by Hector Neris that led to both teams coming out onto the field.

There was a lot of jawing, but not much more than that. Servais was ejected, although afterwards he was not certain why.

“The benches cleared and [the umpires] are going to step in and do something, and that’s what they did,” Servais said of his ejection.

After Rodriguez’s homer, Neris threw behind Eugenio Suarez. Neris, who had been warned, was ejected this time, along with Astros manager Dusty Baker.

After the dramatics, Diego Castillo closed it out with little drama in the bottom of the ninth. That assured the Mariners their first winning road trip of the season and it puts them one victory from another series win.