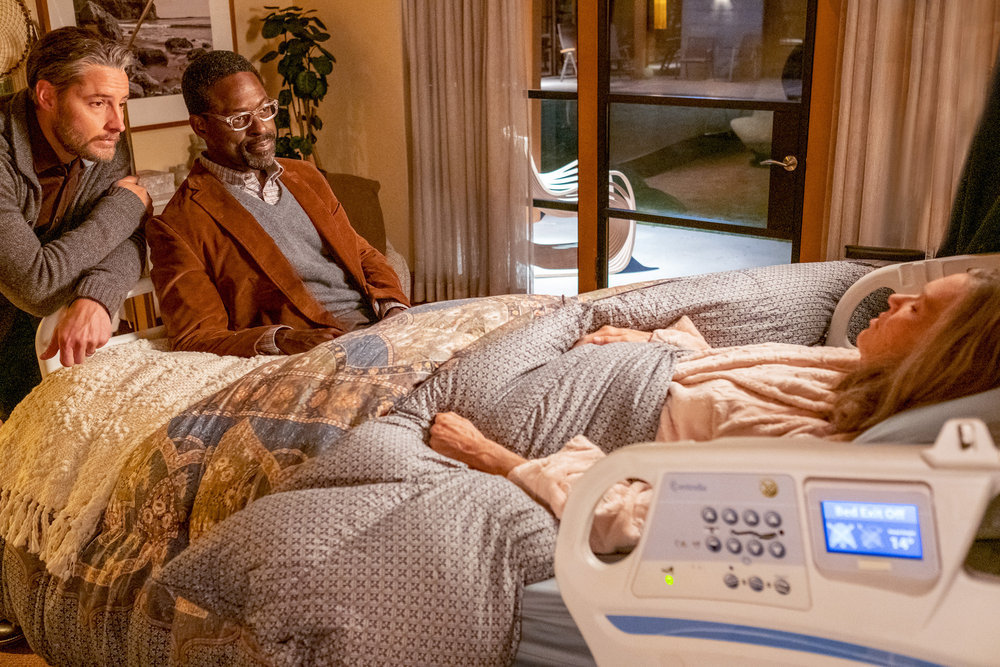 SPOILER ALERT: The story includes details about the May 17 episode of This Is Us, “The Train.” It was played Monday night at the Landmark Theater as part of Deadline’s Awardsline Screening series, followed by a Q&A with series creator and executive produced Dan Fogelman. You can watch a two-part video of it, in which he dissects “The Train” (above) and previews next week’s series finale (below the story.)

The flash-forward scene This Is Us fans have been looking forward to — and dreading — for years played out tonight, with The Pearsons and their families gathering at Kevin’s house to say their final goodbyes to Rebecca on her death bed.

There were a lot of tears as the Big Three’s significant others — past and present — took turns at Rebecca’s bedside to tell her how much she meant to them. Randall and Kevin went in last as Kate raced from London to join them. She got there in the morning just in time for the trio to say their final “I love you”s to Rebecca as she took her last breath.

Running parallel to Rebecca’s final hours, a younger version of her found herself on a train, a nice throwback to the “Caboose” episode earlier this season and flashbacks to her train rides with her dad decades ago. She was guided through the cars by William and spent time with the train’s bartender, who was none other than Dr. K who was making literal lemonade out of lemons.

There was also a surprise third parallel storyline involving a new family with two sons and a daughter we hadn’t seen. The dad Kenny, played by Dulé Hill, lost control of the family car and one of the sons, Marcus, was taken to the hospital in critical condition. For a little while it seemed like grownup Marcus may be future Deja’s boyfriend. It turned out she was still with Malik, who was revealed the father of her baby, while the car crash and the Pearsons fire happened on the same day, with Marcus and Jack being treated by the same doctor, Dr. Spencer, played by the same actor, Bill Irwin, who guest starred in This Is Us‘ Super Bowl episode.

Kenny bumped into Jack at the hospital where Jack shared Dr. K’s making lemonade out of lemons wisdom which Kenny then made his own family motto. Marcus, who was miraculously revived by Dr. Spencer just as Jack was dying a few doors down, went on to become a top researcher. He was honored for his contributions to finding cure for Alzheimer’s, with the man who handed him the award played by The Is Us director/EP Ken Olin, who helmed “The Train”.

As young Rebecca and William walked through the train, with some memorable ones This Is Us moments playing out around her, including Jack and young Randall’s karate class scene, the two reached the caboose.

“This is quite sad, isn’t it, the end?,” she said. “Oh, I that’s not the way I see it, if something makes you sad when it ends, it must have been pretty wonderful when it was happening,” William replied. “You will see that the end is not sad, Rebecca, it’s just the start of the next incredibly wonderful thing.”

As her younger version entered the caboose, which was set up as a bedroom, Randall in real life whispered in dying Rebecca’s ear, “You tell him ‘hey.'” Rebecca squeezed his hand as if to confirm she heard him, and moments later , young Rebecca lied down on the bed on the train, turned around to see young Jack and told him, “hey.”

In the first part of his video interview (you can watch it above), Fogelman speaks about filming that final scene, which required a reshoot, as well as the entire emotional episode. He explains why the train was picked as backdrop to tell the story of Rebecca’s death, why he brought back William (Ron Cephas Jones) and Dr. K (Gerald McRaney) and why we got “mustache Jack” in that final scene.

Fogelman also explains the storyline with Kenny and Marcus, how he finally convinced thirtysomething alum Olin to do a cameo on the show he has been an EP and director for six seasons, and why Deja ultimately ended up with Malik.

“It’s about the strange dichotomy of trauma and joy in our lives,” Fogelman said about juxtaposing Marcus and Jack’s story which had been an idea they’d had on the show for years.

During the conversation, Fogelman also gets personal, speaking about how losing his mom suddenly, without being able to say a proper goodbye, influenced writing the scene in which the Big Three spoke to Rebecca for the last time.

In the second video (you can watch it below), Fogelman speaks about This Is Us’ upcoming series finale next week, “Us,” which he also wrote.

He teases the storyline for the final episode and explains how the new material was blended with footage he had famously filmed four years ago.

Fogelman calls the last two hours of This Is Us “very different episodes that speak to each other.”

“In the last episode, we will try to capture something simple which, while sad, is kind of a day in the life, which is so much of what the show is about, set against Rebecca’s funeral,” he said.

The show intentionally resolved all major mysteries ahead of time “so people can sit with the family in the final episode in the simplest of way,” Fogelman said. “While it will make you cry, it will make you sad, the end of the finale moves me in a way that is different. I think the cast and crew captured something about the human condition and the condition of being a person in the family that I am really proud of.”

He also jokingly teased another death and shared a line from the finale, “I wish I’d enjoyed it more while it was still happening instead of worrying when it will end.,” revealing which character says it.

Additionally, Fogelman reacts to Seth Meyers at the NBC upfront earlier in the day pitching a This Is Us reboot, That Was Themand says whether he would do a spinoff or any other This Is Us– related series.