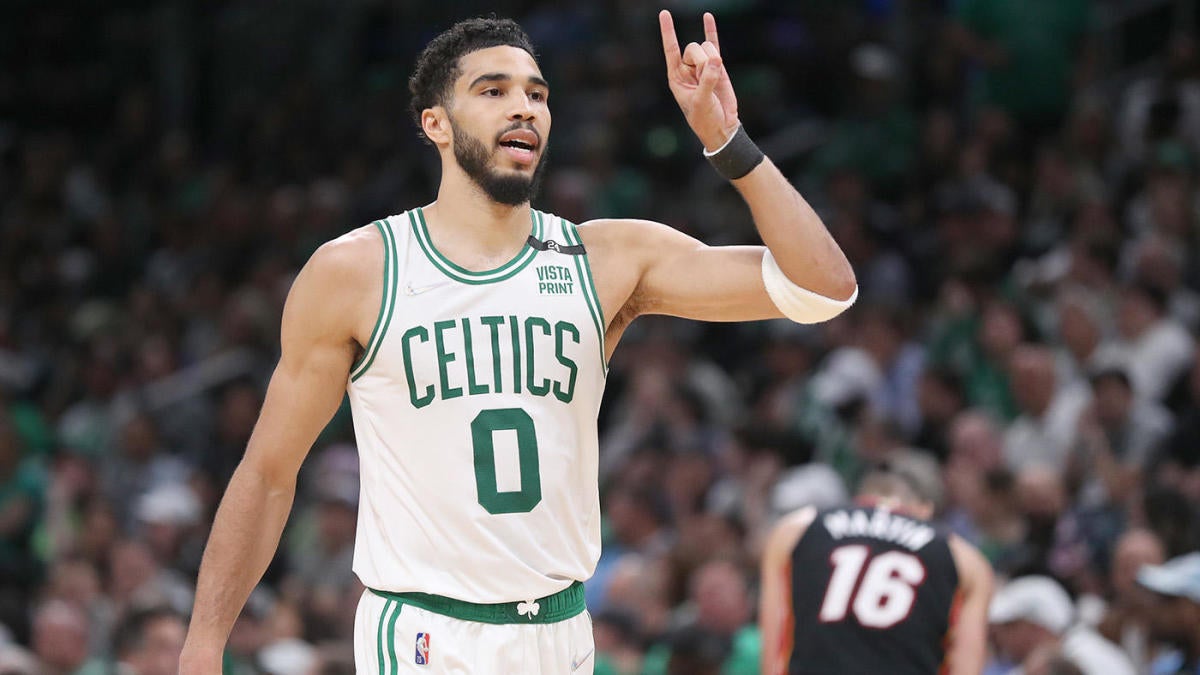 The Eastern Conference finals is now tied after the Boston Celtics dominates the Miami Heat in Game 4 to grab a 102-82 win Monday night. It was never really close, as Boston capitalized off Miami’s shooting struggles to carry a commanding 24-point lead into halftime and never looked back from there. Jayson Tatum led the way for the Celtics with 31 points, eight rebounds and five assists, but it was really a team effort as four of Boston’s five starters scored in double figures.

Victor Oladipo shouldered the scoring load for the Heat as he finished with 23 points. The Heat struggled all night long to get anything going on offense, and as a result they’ll now head back to Miami with the series tied at two games apiece. Game 5 will take place on Wednesday in Miami as both sides try to gain an advantage in a back-and-forth battle.

Here are three takeaways from Boston’s blowout win over Miami in Game 4.

1. Bounce back night for Tatum

Tatum finished Game 3 putting up just 10 points in 40 minutes of action. The Heat defended him incredibly well in that contest, as he shot just 21.4 percent from the field and went 1 of 7 from 3-point territory. His subpar scoring performance was one of the main reasons the Celtics lost that game, despite Jaylen Brown going off for 40 points. So it was obvious that Tatum would try to get going early in Game 4 to avoid a repeat performance from his previous game.

Fast forward to Monday night and Tatum surpassed his point total from the previous game with two minutes left in the first quarter. He wasn’t just making the easy shots — something that he struggled with in Game 3 — but he was also knocking down some incredibly difficult looks despite Miami’s defense being draped all over him. On several occasions he drove to the rim and contorted his body just enough to avoid potential blocks from Bam Adebayo and finish strong at the rim. He still struggled to get things going from long range, but he feasted off what the heat gave him at the rim and from mid range. It’s the exact type of performance the Celtics needed from Tatum after a disappointing showing in Game 3, and his aggressive play from start to finish helped lead his team back to even this series before hitting the road again.

2. A historically bad night on offense for the Heat

Miami started out Game 4 missing its first 14 shots straight, and fell behind by 17 points in the process. A made triple by Oladipo with 3:22 left in the first quarter ended that drought, but by that time Boston had already worked up a 14-point lead, and the game really felt over from that point. Miami putting up just one point in the first eight minutes of the game were the fewest points from a playoff team in the last 25 years of the league. To make matters worse, the 11 points Miami totaled in the first quarter were the fewest in franchise history. The Heat finished the night shooting just 33.3 percent from the field and 38.9 percent from 3-point territory, and as a result this game was over with a few minutes to go in the third quarter.

So yeah, you could say it was a rough day at the office for the heat. Those shooting struggles only magnified the importance of Tyler Herro on this team, who was sidelined for Game 4 with a groin injury. Herro’s ability to create his own shot, while also creating scoring opportunities for his teammates is integral to Miami’s success, and his absence was deafening Monday night. Oladipo tried his best to fill that void off the bench as he led all Heat scorers with 23 points, but when Bam Adebayo, Kyle Lowry and Butler combine for just 18 points, Miami isn’t going to win many games. Those 18 points by the Heat starters were the fewest scored by a team’s starting lineup in a playoff game since the 1970-71 season. Tatum, meanwhile, scored more points (31) than all five Miami starters combined (18).

Though the Heat struggled heavily in Game 4, it must be mentioned that Butler, Lowry, Gabe Vincent, Max Strus and PJ Tucker all appeared on the injury report in addition to Herro heading into this matchup. Butler has been dealing with knee inflammation and didn’t play in the second half of Game 3 because of it, so it’s unclear how much that impacted his performance Monday night. While every team remaining in the playoffs is dealing with a variety of injuries, it was clear Monday night that some of Miami’s players were feeling the effects of this non-stop playoff schedule. We’ll have to see how the Heat respond in Game 5 on their home floor, because if they show up playing like they did in Game 4, then they should expect the same result again.

3. Back and forth this series goes

The story of this series has been about which team can get out on a run and maintain it. In Game 1, Miami outscored Boston by 24 points in the third quarter which ended up being the difference-maker in that contest. In Game 2, the Celtics returned the favor by outscoring the Heat by 25 points in the second half and keeping their foot on the gas in that win. Miami responded in Game 3 with a 39-point, first-quarter performance that helped them carry to what ended up being a closely-contested game.

With Boston’s Game 4 blowout, the theme of the winning team getting out to a huge lead continued and as this series shifts back to Miami for Game 5, we’ll have to see if that trend continues. This isn’t how I expected this series to go given how formidable both teams can be on defense. So the thought of either team getting out to these huge leads that for the most part have been the difference-maker in the game has been really surprising. It feels like neither team has been able to establish consistency from game-to-game, so that trend will likely continue for the remainder of this series. So if you’re the Heat, despite the poor showing in Game 4, you have to feel good about your chances to bounce back given the seesaw nature of this series.