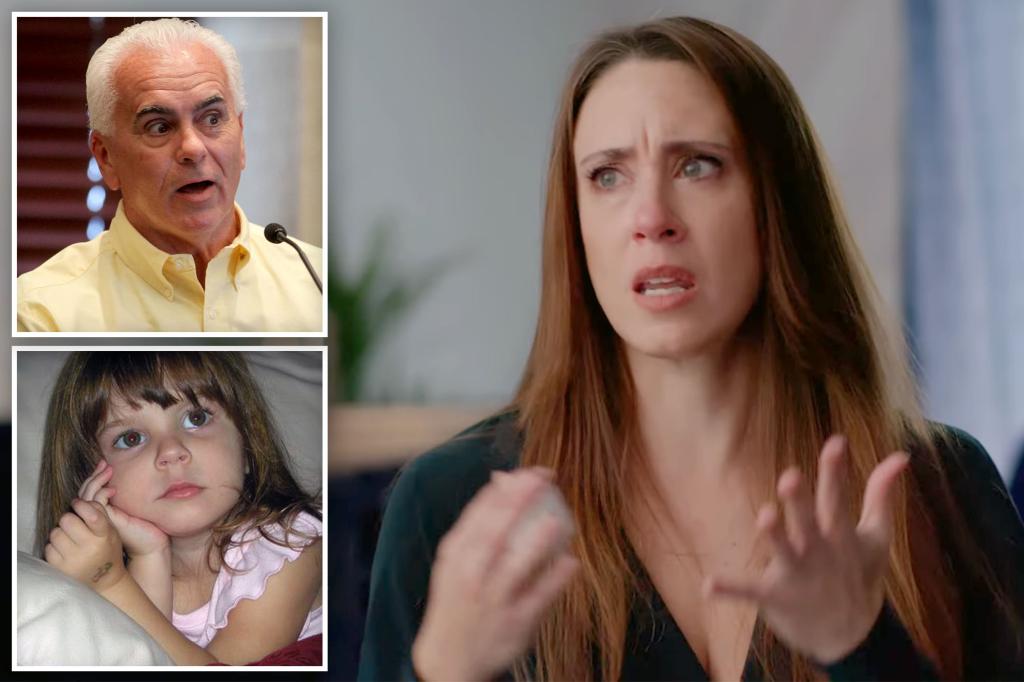 Casey Anthony blames her dad for the 2008 death of her 2-year-old daughter Caylee — claiming in a new documentary it was to cover up a pattern of violent sexual abuse he’d also inflicted on her.

In her first on-camera interviews 11 years after she was cleared of murdering her daughter, Anthony, now 36, said that she “still [doesn’t] know what happened to Caylee.”

But “it all comes back to my dad,” she stated bluntly of ex-cop George Anthony in an upcoming Peacock docuseries seen by The Post.

Anthony accused her dad — who became the prosecution’s key witness against her — of having repeatedly raped her growing up.

“He’d put a pillow over my face and smother me to knock me out … I’m sure there were times where I was incapacitated as a child where my body was limp and lifeless,” she claimed.

She broke down in tears as she admitted to “dark” fears that her “pedophile” dad had abused Caylee, too.

“I know what he did to me — and that was my fear. I had one job — to keep her safe,” she said through tears of Caylee.

“I did protect my abuser — and protected her abuser. And that crushes me.”

Her dad was never allowed to be alone with her daughter, she said. But the last time she saw Caylee alive was resting next to her in bed on June 16, 2008, when “it’s possible the door was unlocked” to her room.

“I know my dad was at home … I was awoken by him shaking me and asking me where Caylee was,” she said, insisting it “didn’t make sense” because her daughter “would never” leave without telling her.

After a frenzied search, she went outside and saw her dad “standing there with her.”

“She was soaking wet. I can see him standing there in his hands, telling me that it’s my fault, that I did that — that I caused that,” she said.

“But he didn’t rush to call 911 and he wasn’t trying to resuscitate her. And I just collapsed with her in my arms,” she said, recalling that she was “heavy” and “cold.”

“As I’m sitting there with her on my lap, just hysterical — just staring at her not knowing what to do — he takes her from me and he immediately softens his tone and tells me, ‘It’s gonna be OK.’ That she was going to be OK.

“That’s what he said to me, and I wanted to believe him — because I wanted her to be OK,” she sobbed.

She still doesn’t know why her daughter was wet, but said the ladder to the pool wasn’t there at the time. “There are too many scenarios of what could have happened — but her drowning in the pool is not one. It’s not possible,” she said.

“I can tell you about how numb I felt and how broken I felt and confused — but also hopeful because I believed that she was still OK,” she insisted, saying that she has to “live with” the fact that she “failed my children.”

Anthony claimed she was too “numb” to confront what may have happened — while maintaining that she genuinely believed Caylee was alive right up until her skeletal remains were found in trash bags, with duct tape wrapped around her head.

She also blamed her dad for her instinct to lie about what had happened, calling him “a man incapable of ever telling the truth” whose behavior she “completely replicated” when her daughter was missing.

Anthony had grown up lying “more than I ever told the truth because the truth was too painful and it was too unreal to ever describe to someone,” she said of her alleged abuse.

That included lying to the cops when her daughter was missing, she readily admitted of the sole charges she was convicted of, leading to three years in prison.

“It was the right guilty verdict — I did lie to law enforcement,” she said.

She said she waited so long to tell her story because she “spent the last 10 years making sure that I knew who I was — that I had started to cope with this loss, and that I had something to say to make my daughter proud, but also to honor her properly.”

“And this is part of that,” she said of sitting for the docuseries.

“It’s hard because 1,000 questions go through my head. … I still don’t know what happened to Caylee.”

Even if she found the exact truth of what happened, Anthony said it would never bring her “full closure.”

“I didn’t get the ending I wanted because I didn’t get my kid back,” she said of “the sh—iest bad dream” of having “the shortest life” with her “sweet little kid.”

“That’s the only ending I wanted. And that’s the one thing I will never get out of all of this.”

George Anthony did not respond to questions from the filmmakers, the show said. He has repeatedly vehemently denied abusing his daughter or being responsible for his granddaughter’s death.

“Casey Anthony: Where The Truth Lies” streams on Peacock from Nov. 29.