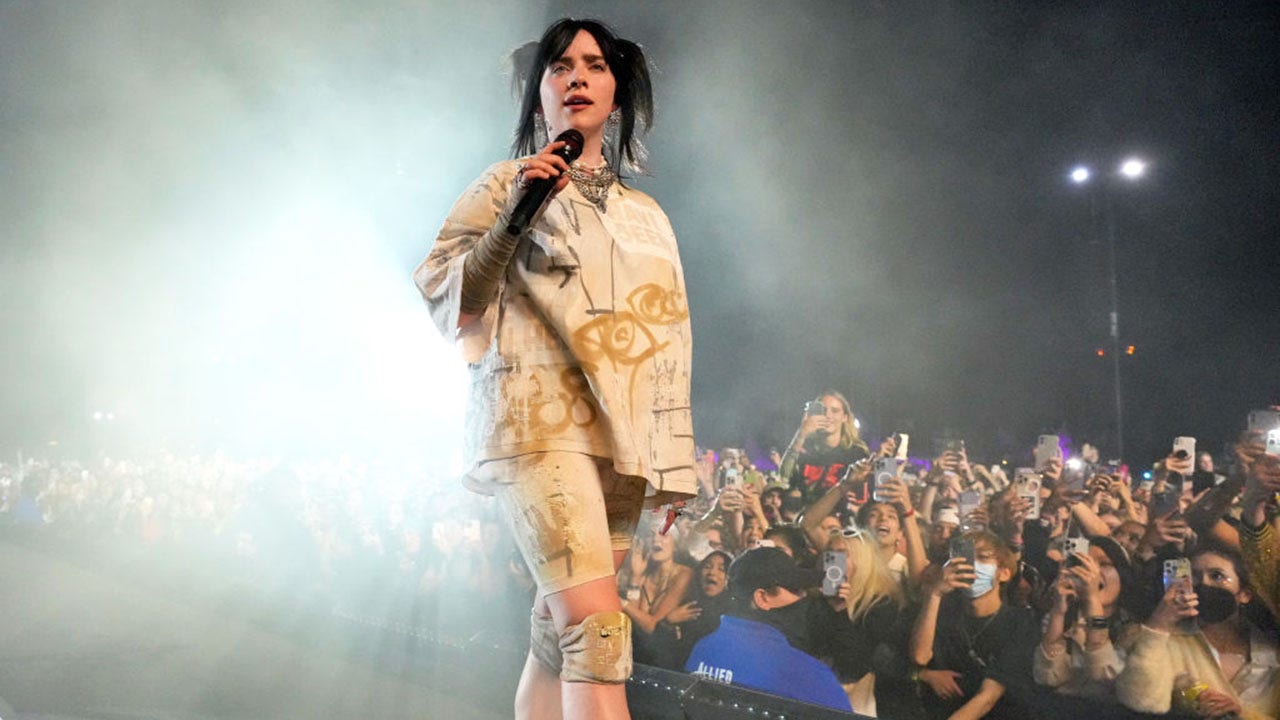 Billie Eilish was head over heels during her performance at Coachella on Saturday night.

The 20-year-old pop star took a fall during her headlining performance at Coachella’s weekend two. As Eilish was preparing to perform her hit song, “Getting Older”, she fell directly on her face.

“I just ate s–t,” Billie yelled, documented through videos on social media. “Ouch! You guys, I just ate a– up here.”

Billie Eilish face planted before performing her hit song “Getting Older” at Coachella on Saturday night.
(Photo by Kevin Mazur/Getty Images for ABA)

Eilish didn’t hurt herself during her fall, citing that she “tripped on the f–king fire thing.”

After her performance, the star shared with the crowd what happened. “It was pitch black,” she said in the video. “You see that square? This f–king thing? I went de-de-de-de-de-de-de-de-de and fell onto my face.”

The crowd immediately rushed to Eilish’s defense, yelling “F–k the square” at the singer. Eilish turned the chant into a joke, repeating the phrase and laughing on stage.

After performing “Your Power” with her brother, Finneas O’Connell, Eilish joked with her fans about who the now-empty seat next to her was for.

Finneas and Billie Eilish perform onstage at the Coachella Stage during the 2022 Coachella Valley Music And Arts Festival in April.
(Photo by Kevin Mazur/Getty Images for ABA)

“Oh, look! An empty seat. Who’s that for?” Eilish asked the audience. She then introduced her guest performer, Paramore’s lead singer, Hayley Williams.

“This is my first Coachella, whoa,” Williams said as the duo sat down. “Thanks for sharing this with me. This is sick!”

The two performed a duet of Paramore’s hit song “Misery Business”. After the performance, Eilish shouted to the crowd, “Oh my f–king god,” she said as Williams left the stage. “Absolutely what on earth could be cooler than that? I’m dead serious.”

Williams’ wasn’t done making her Coachella debut as she returned to the stage later on in Eilish’s set to perform “Happier Than Ever” alongside her.

(LR) Hayley Williams and Billie Eilish perform on the Coachella stage during the 2022 Coachella Valley Music And Arts Festival on April 23.
(Photo by Amy Sussman/Getty Images for Coachella)

Friday night’s headliner was Harry Styles and during weekend two, the singer brought out Lizzo as his surprise guest. Sunday night’s main performance will be Swedish House Mafia and The Weeknd, who replaced Kanye West after he pulled out of the festival earlier this month.

Swedish House Mafia had already been listed as performers prior to the lineup change, but it wasn’t immediately clear when they were to perform. Now they are listed at the top of the Sunday night schedule, along with The Weeknd.

West and Eilish have had their own share of disagreements in the past several months.

The feud started when Eilish stopped a concert in February when she saw a fan in the audience who needed medical assistance.

Kanye West demanded that Billie Eilish apologize to Travis Scott after she stopped a concert in February when she saw a fan in the audience who needed medical assistance.
(Getty)

“We’re taking care of our people,” the singer said in a Video shared by a concertgoer at the Atlanta show. “I wait for people to be OK, until I keep going.”

West, 44, took it upon himself to reach out to Eilish on Instagram to tell her she owed an apology to Travis Scott. While Eilish made no mention of the “Astroworld” rapper, West seemed to think her helping out a fan in distress was a slight at his estranged-wife’s little sister’s boyfriend.

“Come on Billie we love you. Please apologize to Trav and to the families of the people who lost their lives. No one intended this to happen,” the “Donda” rapper wrote on his Instagram page. “Trav didn’t have any idea of ​​what was happening when he was on stage and was very hurt by what happened, and yes Trav will be with me at Coachella, but now I need Billie to apologize before I perform.”

Eilish responded to West in the comments section of his post: “Literally never said a thing about travis. was just helping a fan.”

After the Astroworld tragedy, Travis Scott was removed from the 2022 Coachella lineup in December. Per TMZ, Scott was still in the desert during the first weekend of Coachella and performed at an after party nearby.