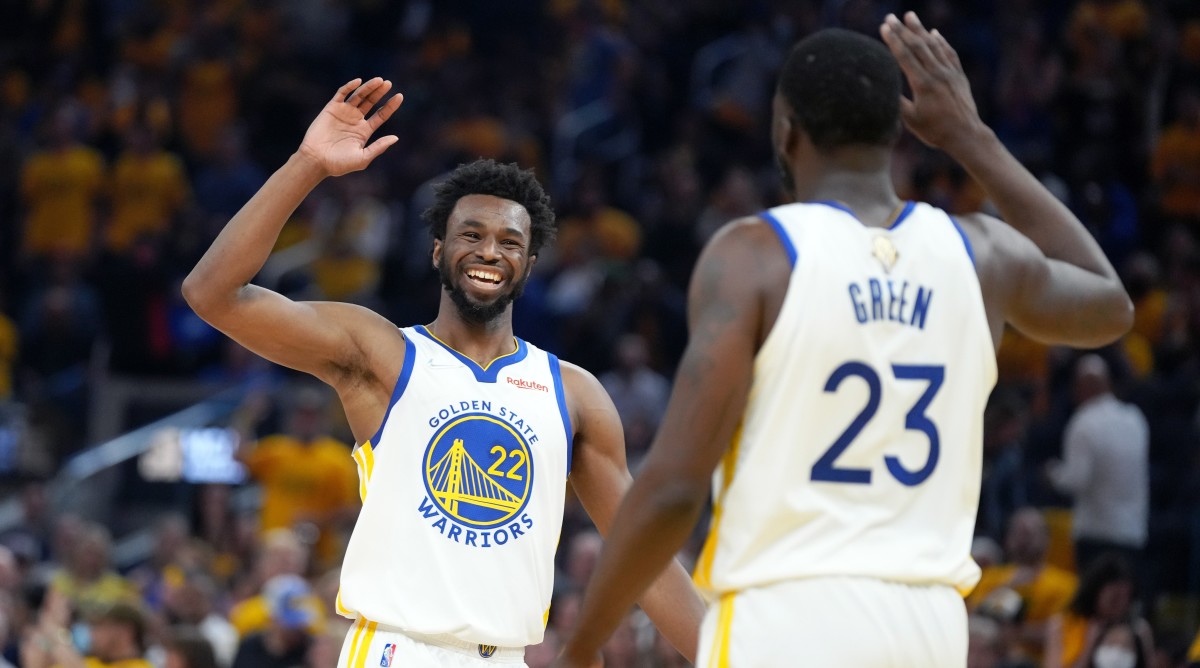 Prior to this season Andrew Wiggins‘s playoff summary consisted of a five-game stint with Minnesota in 2018. Wiggins averaged 15.8 points in that series and the T-Wolves were eliminated in the first round. In 20 postseason games this year Wiggins is averaging 16 points. He’s collecting 7.3 rebounds. And after a 26-point, 13-rebound effort in Game 5, he has pushed the Warriors to within one win of a championship.

It was Golden State 104, Boston 94 on Monday, with the Warriors seizing a 3-2 series lead. After beating the Celtics in Game 4, Golden State came out hot, racing to an early 27-16 first quarter advantage. Wiggins scored seven points in the first and led a Warriors defense that held the Celtics to 34.8% shooting.

The second quarter was more of the same. Wiggins again keyed the Warriors offense, chipping in nine points. This time, though, Boston kept pace, with Jayson Tatum and Marcus Smart combining for 14 points in the quarter. At halftime, Golden State went into the locker room with a 12-point lead.

The Warriors have owned the third quarters in this series. Through the first four games, Golden State outscored Boston 136-87 in the third. In Game 5, the Celtics turned the tables. Tatum got going. It’s been a frustrating series for Tatum. With Wiggins draped all over him, Tatum failed to crack 40% shooting in three of the first four games, with the physicality of the Finals appearing to impact him. In the third quarter, though, Tatum got hot. He scored nine points, connecting on 3-of-4 from three-point range. Smart and Jaylen Brown scored nine each. After missing its first 12 threes, a Finals record, Boston connected on its next eight—also a Finals record.

Boston’s vaunted defense locked in, particularly on Stephen Curry. After scoring 43 points in Game 4, Curry struggled in Game 5. He scored 16 points on 7-of-22 shooting, including 1-of-6 in the third quarter. “They were trying to attack him over and over,” said Steve Kerr. After leading by as many as 16, Golden State entered the fourth clinging to a one-point lead.

In the fourth, the warriors took over. Klay Thompson scored six of his 21 points. Gary Payton II, who has given Golden State a huge lift on both ends since his return from an elbow injury, scored four of his 15. Curry chipped in four more. Wiggins scored 10, the last two a driving dunk with just over two minutes left to give Golden State a 15-point lead.

This season has been about redemption for Wiggins. the no 1 pick in 2014, Wiggins failed to play up to his potential in six seasons in Minnesota. In 2020, the Warriors acquired Wiggins—along with a first-round pick—in a deal for D’Angelo Russell. Offered stability for the first time in his career, Wiggins, who played for four head coaches in Minnesota, thrived. Last season, Wiggins averaged 18.6 points in 71 games, connecting on 38% of his three-point attempts. This year Wiggins averaged 17.2 points while shooting 39.3% of his threes. He was named an All-Star starter. He developed into Golden State’s top wing defender. Kerr has called Wiggins the “key move” to revive the Warriors dynasty.

“We knew we needed his athleticism and defense and his versatility,” Kerr said. “We had no idea that he would make this kind of contribution. But I think it’s a reminder that for almost every player in the NBA, the circumstances are everything. You kind of need to find the right place, the right teammates, that kind of stuff. Wiggs has been in great shape.”

The Celtics will head home with a chance to save its season. Boston has been here before. They rallied from a 3-2 deficit to beat Milwaukee in the second round. But the Celtics’ self-inflicted wounds are troubling. Boston continues to play carelessly. They committed 18 turnovers in Game 5—compared to seven for Golden State—which led to 22 Warriors points. They missed 10 of their 31 free throws. They surrendered 50 points in the paint.

“Now our backs are against the wall,” said Al Horford. “And we have to see what we’re made of. The challenge begins on Thursday.”

Boston needs its stars to show up. Tatum’s final stat line was solid—27 points on 10-of-20 shooting—but he was streaky and scored just five points on 1-of-5 shooting in the fourth quarter. Brown scored 18 points but needed 18 shots to do it. In the fourth quarter the Celtics had as many made baskets (four) as turnovers. “We’re not having consistent effort, sustained effort,” said Ime Udoka.

They’ll need it. Curry doesn’t have the kind of high level superstar next to him he has had in previous seasons, but he has help. Draymond Green had arguably his best game of the series, Payton and Jordan Poole have given the Warriors some punch off the bench and Thompson, who has made 41% of his threes over the last three games, looks sharper by the day.

And there is Wiggins. Once, Wiggins looked poised to be immortalized among the top NBA busts. Now, he is one win away from helping a team to a championship. Late Monday, Green was asked why Wiggins has fit in so well.

“[Tom Thibodeau] was telling us that Jimmy [Butler] loved him,” Green said, citing Wiggins’s time in Minnesota. “And we all know how Jimmy Butler is. If you got any softness in you, Jimmy don’t like you. … He’s taken on every challenge that we have thrown in front of him, and it’s huge. We need him to do that for one more win.”