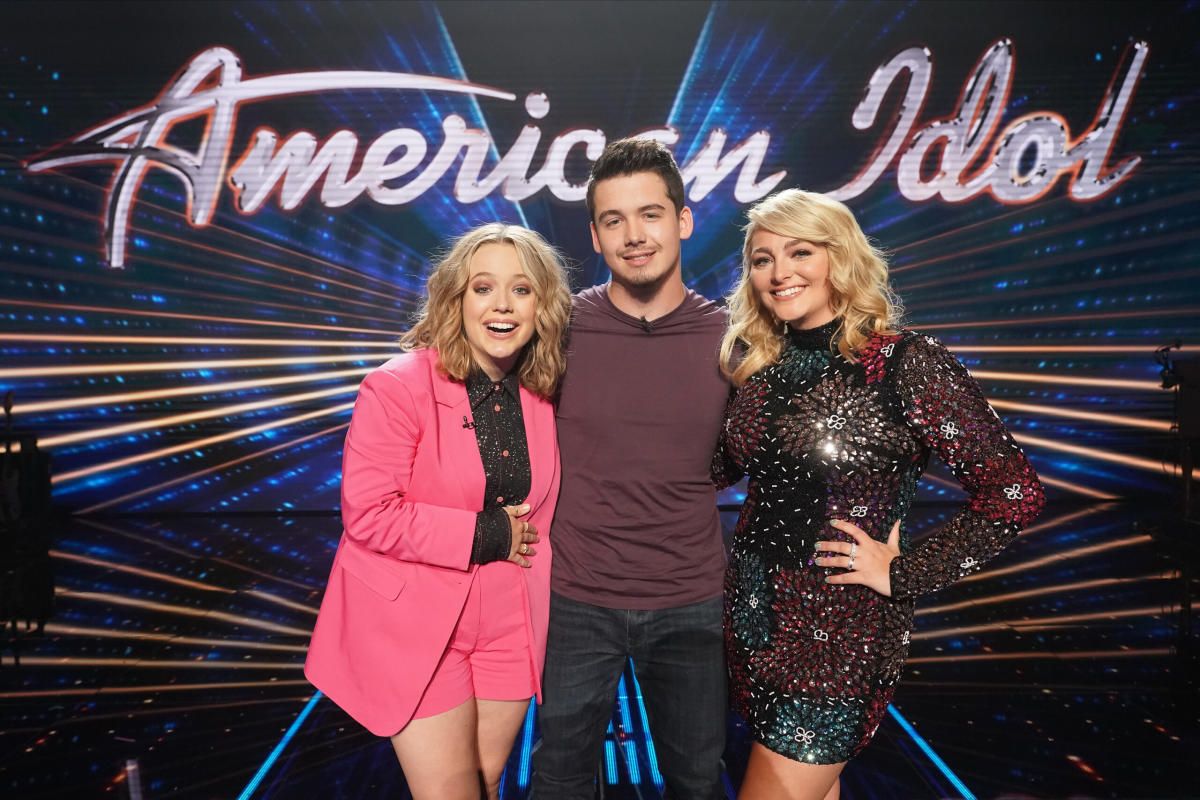 A star was born in the USA on Sunday, when American Idol Season 20’s Springsteen-themed finale climaxed with Kentucky construction worker Noah Thompson winning the idol title. This result was slightly surprising, considering that regularly gigging country-rocker HunterGirl had been pushed as this year’s golden girl ever since judge Luke Bryan had hand-delivered her the series’ first-ever coveted platinum ticket. Meanwhile, Noah — who had no vocal training or professional experience — had only tried out for the show because his co-worker Arthur had secretly signed him up. (“He’s not born to be working with us,” Arthur told the judges on the Season 20 premiere, giving a passionate speech that made it seem like he was also auditioning… to be Noah’s manager or publicist.)

Viewers apparently agreed with Arthur, or at least connected to Noah’s classic underdog idol story. But runner-up HunterGirl and third-place indie troubadour Leah Marlene definitely gave Noah some stiff competition Sunday. Any of the three contestants could have been the boss of this season, based on their final performances.

The three-hour finale started with the top three performing songs by the ultimate all-American rock ‘n’ roll idol, Bruce Springsteen (an idol first), and while I would have loved for this season’s crop of country/American/indie singers to take a shot at a Nebraska or Born to Run track, they all interestingly went with Born in the USA do it. Leah chose the least obvious song, “Cover Me,” and while it was a sexy, self-assured performance that leaned heavily into that ’80s-stadium-rock thing she did so well with last week’s Journey and Pretenders covers, judge Lionel Richie seemed to think the leftfield choice would hurt her, warning, “I’m telling you, it is important: Song choice is everything now. Familiarity — you want the audience to be singing along with you.” Lionel still assured Leah that even if “Cover Me” was “not that familiar,” she “turned it into her song regardless,” and Katy Perry thought it was “such a groove” and called Leah “the whole package.” But then Katy told Leah, in what seemed like a diplomatic kiss-off, “Just the amount of growth that you’ve done in such a short amount of time, you’ve won, period — end of story.”

Apparently it What the end for Leah’s run on idol, but her story is really just beginning. For the second round, the top three performed their original debut singles — ironically, songs that, by design, Alles of America would be unfamiliar with — and this was Leah’s time to shine. Leah’s moody folk-pop ballad “Flowers” ​​was a wistful ode to her past self, and it definitely was the hippest of the night’s originals, giving off miracle-era Fleetwood Mac vibes. It was a truly connected, sweet performance, and an admittedly “overwhelmed” Leah was in tears as the excited studio audience rallied around her.

“The crowd will not lie. When they start chanting like that, you’re onto something, my child. Props to your songwriter side,” proclaimed Lionel. “That song is so beautiful and is going to change so many other people’s lives. You are a brilliant messenger,” said Katy. Later, Katy and Leah joined forces for a duet of Katy’s “Firework,” a song that Leah once adorably performed acoustically at age 9. So, in a way, Leah really did win, as her childhood dreams came true.

After round two, Ryan Seacrest announced the season’s third-place result, and then it all came down to the two country crooners — giving longtime idol viewers like myself flashbacks to Season 10’s Scotty McCreery/Lauren Alaina finale (when hipster outlier Haley Reinhart placed third, but went on to have a great indie career.) As for this year’s finale’s other two Bruce tunes, HunterGirl went with possibly the most obvious Born in the USA anthem, “Dancing in the Dark.” It was her usual goodtime gal shtick — fun but lightweight, not exactly taking a chance or reinventing any wheels. The crowd ate it up, however, as did the judges, who’d been rooting for her all season. “You’re really having fun with it. You’re playing with everyone. You’re comfortable. This is your stage. You really brought that electricity with that. … I don’t think you’re a star; I think you’re a supernova,” raved Katy, while Lionel told HunterGirl, “The fact is, you now own the stage. My dear, you have a career.”

Raspy everyman Noah was already the finalist most likely to benefit from the Bruce treatment, but he made the best selection, delivering a smoldering rendition of Katy’s favorite Springsteen song, “I’m on Fire.” Lionel nicknamed him “Noah Springsteen,” and Katy gushed, “So many people have fallen in love during that song, used it as their first-dance song. I think you just swooped in and grabbed every heart in America by singing that song.”

In the originals round, however, it was HunterGirl who had the edge. Noah’s single, “One Day Tonight,” sounded modern, if generic and midtempo and just way too safe. It definitely wasn’t the best showcase for his sultry, husky tone. But it had charted before Sunday’s finale even aired, so I suppose that was a good sign. “You’re just about to do something really big. Don’t stop dreaming. There is a plan for you in your life,” Katy told him.

Meanwhile, HunterGirl’s “Red Bird” was just what she needed to un-split the country voting block and potentially steal the championship from Noah. “Red birds have been a big thing for my family,” she explained. “It means when you see a red bird, that somebody’s watching over you.” The sentimental, CW Network-theme-like ballad brought all the feels, even if it wasn’t quite the right fit for HunterGirl’s shouty delivery. (I actually would have loved to hear Leah sing this.) Even the usually stoic Luke was tearing up and reaching for the tissues.

With the top two now seemingly neck-and-neck, HunterGirl and Noah closed the voting by reprising songs from earlier in the season. HunterGirl’s redux of Rascal Flatts’s “Riot” was perfectly pleasant, but it wasn’t quite the moment that Noah’s final song was — and this was when clearly Noah surged into the lead with his encore of Rihanna’s “Stay.” When he went with that outside-the-box song choice during the Showstoppers Round weeks ago, it wasn’t only the first time I really took notice of the green country singer, but one of the best and most interesting performances of the entire season. Revisiting “Stay” now, all cleaned-up-nice in a natty suit, it seemed like Noah’s time had come. He looked and sounded like an idol. “That was one of my favorite songs you sang all season. I’m so glad you picked that. And the growth! From when you sang last time to when you sang it tonight, you hit some notes,” exclaimed Katy. “When you performed that knew earlier in the season, I, we knew, that you had something. You just proved it even more just then,” stated Luke.

And the rest was idol History.

Along with the above Katy/Leah duet, Luke and HunterGirl sang “I Told You So” by Randy Travis, and Noah belted “Only One” with Melissa Etheridge and did a solid job despite, amusingly, not seeming to know who Melissa was. But Sunday’s super-sized finale allowed other contestants besides the top three to shine, starting with the top 10 performing “Good Feeling” with Flo Rida on the roof of the Hotel Roosevelt on Hollywood Blvd., and then all doing guest-star duets. Other highlights included Earth Wind & Fire and Jay Copeland’s vibrant EW&F medley, James Arthur and Fritz Hager’s “Can I Be Him,” Ben Platt and Lady K’s fiery “Take Me to the Pilot,” Michael Bublé and Christian Guardino’s magical and emotional “Smile,” and a stupendous “She Used to Be Mine” by Sara Bareilles and Nicolina Bozzo that ought to have every Broadway casting agent ringing up Nicolina’s number first thing Monday morning.

Judging from Sunday’s talent-packed finale, many of this season’s top 10 have what it takes to launch credible careers. In the meantime, auditions are already open for American Idol Season 21. So, see you next year, when the search for The Next Noah Thompson begins. Parkers out.