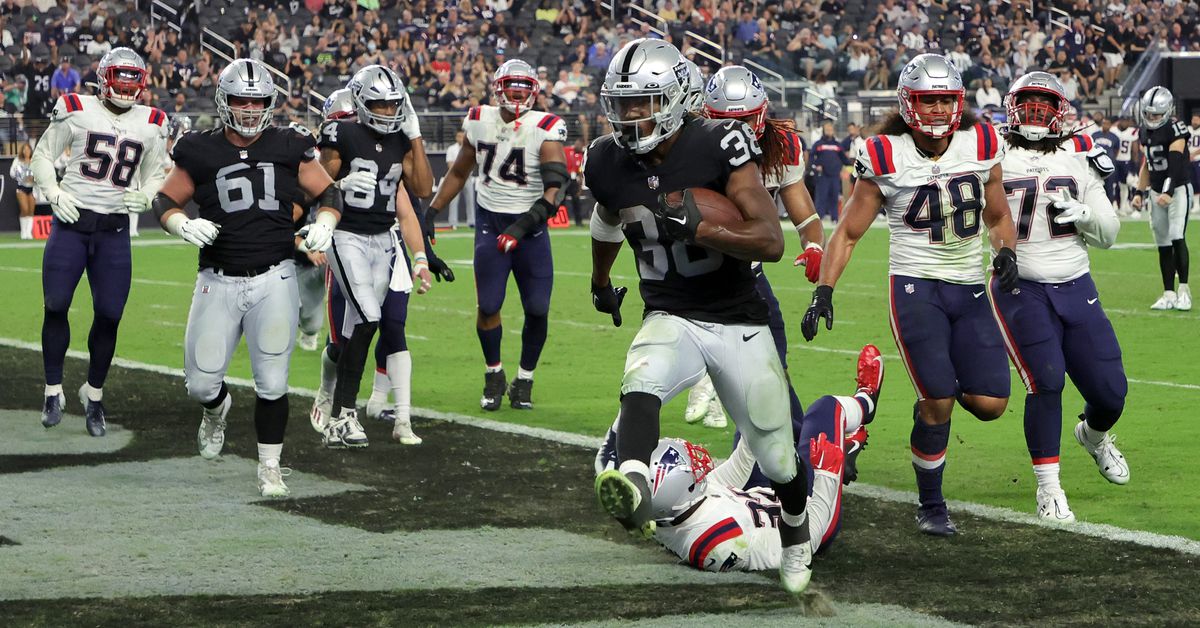 The New England Patriots got whooped by the Las Vegas Raiders on Friday night, and there wasn’t much positive to come out of the game. Hopefully I’ll be able to find one or two but it was an awful game to watch.

Anyway, let’s get into the final 10 takeaways from the preseason and New England’s 23-6 loss.

The first-team offense struggles: The Raiders didn’t play most of their starters on defense, but the Patriots still looked terrible on the offensive side of the ball. From an awful Mac Jones interception, to the offensive line again being unable to open up any running lanes, it was just an absolute mess.

Hunter Henry got tackled in space by a backup linebacker, and couldn’t even fight for a first down. Michael Onwenu looked to struggle again at guard, and there should be a real concern whether he can play in this type of offense.

There were also a few bright spots. When Mac Jones ran forward, and not 20 yards backwards, he looked pretty fast, and even made a nice throw on the run to Henry. Kendrick Bourne finally got back on the field, and had a few catches, as he tries to get back to where he was at the end of last year. There have been a lot of questions about how the offense would look this year, and training camp and the preseason have done nothing to ease the concerns of Patriots fans.

Let’s just hope it looks a heck of a lot better in two weeks’ time.

The first-team defense also struggles: The Raiders also didn’t play their starters on offense, but, just like the offense, the Patriots’ first-team defense struggled anyway. The unit struggled on every level, having a tough time against the run and the pass. It wasn’t all bad, as you still saw some of their players flash, but it was pretty ugly overall.

Kyler Dugger got beat pretty good on a pass, but then made a nice play in the run game. Jahlani Tavai continues to show pretty much nothing, getting smoked on another pass by another backup tight end. There is a lot of optimism for the defense this year, but they’re going to have to play significantly better moving forward.

One reason they may have struggled is that there was almost certainly no game plan, and they were playing against a play-caller and quarterback, Jarrett Stidham, who know the system quite well. Regardless, that shouldn’t be able to happen when supposed starters play against backups.

Mac Jones’ Year 2 jump on pause? Mac Jones looked uncomfortable for much of the training camp, and that trend continued on Friday night. He certainly wasn’t the only one to play poorly, but he has looked more like a rookie this year than he did perhaps maybe all of last year. He just doesn’t seem to be comfortable in this new-style offense, and, at a certain point, one might be beginning to wonder whether that scheme switch was the right decision.

I trust Bill Belichick to do the right thing, and this might be the best offense for this team long-term, but, right now, it’s getting harder and harder to see how this is the right move for 2022.

JJ Taylor steps up: You never like to see an injury, but certainly not in the preseason. Ty Montgomery had been having a great camp, and looked poised to have a big role in the Patriots offense this season. He went down with what appeared to be a serious ankle injury in the first quarter, however, and so that may not happen this year.

On the other hand, JJ Taylor has been working his buttocks off, and has looked good in preseason. With two young backs behind him, however, he seemed to be on the outside looking in for the initial 53-man roster all summer. The Montgomery injury could certainly have opened up a spot for Taylor, and give him another chance to prove that he can be a contributor here.

Jack Jones pops (literally): Jack Jones has been pretty solid in coverage, and continued to show just that on Friday night, but it was his hitting that really popped off the screen. He had a tackle on the sideline that forced a fumble, and had another that knocked a pass away. He’s not a big guy, but this is the stuff that’s all over his college tape, and I think it’s something that we can see expect to see from him moving forward.

He is definitely making the roster due to his fourth-round draft status, but I think we could see Jones playing a good amount of snaps by the end of the season as well.

The offensive line is a mess: The starting offensive line has really struggled this preseason, but the backups haven’t been much better. The zone runs are tough, because one missed block, even on the backside, means that what could have been a solid run turns out to be a loss, or a run for no gain. Micheal Onwenu has struggled on this type of plays in particular, but they just can’t get consistent play from almost anyone on the line.

I think it’s going to look better as the season continues, but it’s going to have to look much better very quickly, or the Patriots are going to be in trouble early during the season.

Kevin Harris almost makes a case for the roster: I had thought that Kevin Harris might be getting a redshirt season, partially because I thought he was very similar in style to roster lock Damien Harris. While that might still be true, he continues to look impressive, and has shown good hands coming out of the backfield as well.

He’s pretty consistently outplayed fellow rookie Pierre Strong Jr. (who, in fairness, has been slowed by injury recovery) all camp. The biggest issue with Harris on Friday night is that he put the ball on the ground twice.

On his long run, the ground caused the fumble, so the Patriots held onto the ball, but he later lost a fumble toward the end of the game. Fumbling is something that the Patriots do not mess around with, and so his rushing and receiving may not be enough to get him onto the roster.

A few roster spots are locked in: There are a ton of questions at the backend of the roster, but it appears that at least two guys have locked in spots for this season. Those guys are undrafted rookies Brenden Schooler and DaMarcus Mitchell.

Schooler has played on almost every special teams unit, and has done a great job out there. Mitchell has done the same on special teams, but also has shown some real flash on the defensive line. We always love talking about UDFAs, but it seems that these two have carved out a role for themselves this season.

The dream appears to be over: Everyone knows my prominent position on the Tre Nixon Hype Train, but I just don’t see how he makes the 53-man roster. For the second week in a row, he dropped a deep pass, and, this week, the defender didn’t even get his hand in there. Nixon should have no trouble getting back onto the practice squad, and I still think that there is a chance for him to make an impact at some point in New England. It just seems that it won’t be this season, though.

The regular season is almost here: This offseason has been a rough one for the Patriots. It started by losing a tone of their coaches, with Josh McDaniels going to Las Vegas and taking several assistants with him. Bill Belichick decided to replace McDaniels with Matt Patricia and Joe Judge, and, for now, that looks to be a questionable decision at best. I’ll keep saying it, but I trust that Bill Belichick knows what he’s doing, so I will never count this team out. It hasn’t been great, though.

They also decided to move on from both JC Jackson and Stephon Gilmore last season, and are going into the season with a ton of unproven players on the defensive side of the ball. These moves have left the Patriots with far more questions than answers right now, but my hope is that they start looking better once the games actually count and game-planning comes into play as well.

The good news is that it seems that they once again appeared to have had a very good draft, so they are adding to their stock of young talent. Not sure how much the rookies can help this year, but knowing there is some young talent and athleticism in the pipeline is a good thing.

Training camp and the preseason were tough to watch at times, but I do think, just like anything, there are some positives to take away from what the Patriots did this spring and summer. Thankfully, the next time I write one of these, it’ll be the regular season, and I think that might just be the best thing about the game last night: preseason is finally over.